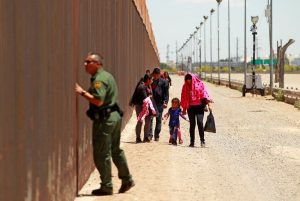 A group of Central American migrants walks next to the U.S.-Mexico border fence after they crossed the borderline while a Border Patrol agent looks through the fence in El Paso, Texas, U.S May 15, 2019. REUTERS/Jose Luis Gonzalez

A federal appeals court late Wednesday ruled the Trump Administration can use nearly $4 billion in military funds for construction of the president’s long-promised border wall.

The U.S. Court of Appeals for the Fifth Circuit reversed an earlier decision by El Paso-based U.S. District Judge David Briones that blocked the spending. The latest decision allows the funds to be spent while the case plays out in its appeal.

The $3.6 billion had been earmarked by the Trump administration for construction of 11 barriers on the southern border, CNN reported Wednesday. The original lawsuit was filed by El Paso County and the Border Network for Human Rights, an El Paso-based advocacy group. The Trump administration asked the appeals court to consider the matter on December 16.

The administration has so far been stymied in most of its efforts to come through with one of the president’s signature campaign promises, but the latest ruling could change that as the 2020 elections approach. The president has been successful in curbing the number of unauthorized immigrants who have arrived to the U.S. border seeking asylum, thanks to policies that require migrants to wait in Mexico for their court hearings. But despite that success, the president continues to tout the wall as another effective way to stop illegal immigration.

The White House on Thursday called the decision a victory.

“The United States Court of Appeals for the Fifth Circuit has lifted an illegitimate nationwide injunction entered by a lower court, and in doing so has allowed vital border wall construction to move forward using military construction funds. This is a victory for the rule of law. We are committed to keeping our borders secure, and we will finish the wall,” the White House sad in a statement.