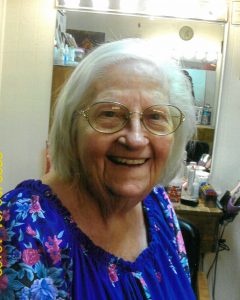 Funeral Services for Bobbie Jean Marshall, age 89, of Sulphur Springs will be held at 2:00 P.M. on January 3, 2020 at Murray-Orwosky Funeral Chapel.  Interment will follow at Mahoney Cemetery with Lee Pogue, Logan Pogue, Wynton Lewis, Morgan Brown, Bobby Robbins and Brian Shultz serving as pallbearers and Eusebio Vazquez, Kevin Bilharz, Mark Poundsand Johnny Morris serving as honorary pallbearers.  Visitation will be held from 6 to 8 P.M. on Thursday, January 2, 2020 at Murray-Orwosky Funeral Home.  Mrs. Marshall passed away on December 30, 2019 at her residence.

Bobbie Jean was born on December 9, 1930 in Dallas, TX to Stacy and Alton Tramell.  She married Cleburn Burns “Jelly” Marshall on June 17th, 1949.  Bobbie was known as “Momma Marshall” to everybody.  There was never an empty chair at the dinner table on Sunday and if you didn’t have a place to go, there was always room for you in her home.

She was preceded in death by her mother, father, husband and two granddaughters, JoAnne Riley and Jesicia White.