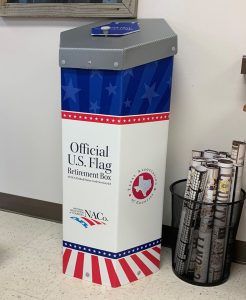 The Hopkins County Sheriff’s Office is now hosting an official U.S. Flag Retirement Box in the lobby of the Sheriff’s Office. The box was provided by the Texas Association of Counties.

When an American flag becomes worn out or torn, there is etiquette dictating how to respectfully remove, retire, and replace that flag. The National Association of Counties is making that process easier for citizens with its U.S. flag disposal program.

Through its partnerships with the National Flag Foundation and the National Sheriffs’ Association, NACo is providing collection boxes for free to its members where residents can dispose of their old and tattered American flags, ensuring the banner receives a proper retirement.