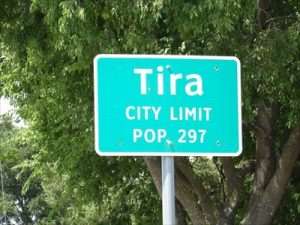 Joyce Dodd reported that the Tira Volunteer Department delivered baskets of Christmas goodies to some of the Tira residents. She commented that she was “very proud” of them and “they all looked so nice dressed in their uniforms” as they delivered  “a little token of appreciation for others.” I’m sure she speaks for all of us when she says, “Kudos, guys, from our community.”

Martha Payton was one of the recipients of their good will. She shared, “Christmas cheer – while watching the Cowboys’ (very disappointing) game on Sunday afternoon, December 22nd, I saw the Tira Volunteer Fire Department truck pull up in front of the house and a bunch of men get out. Don’t get excited, there was no fire. Instead, there were five firemen bringing cookies and Christmas treats and lots of good cheer. It made my day. Thanks so much for the generosity. And to the rest of y’all, support your local fire department. Happy New Year!”

William and Joyce Dodd had their family over for Christmas. Joyce reports, “Those attending were Michael McNiel, Rob Dodd, Jerry and Tonja Lucas, Matt and Maegan Childress, Alyssa and Ethan Shelton, Mandi Owens, Mari Quebedeaux, Brad, Tanya, Matthew, and Trenton Dodd, Melony Huffman, Stuart, Tiffany, Emery, Elliana, and Eadon McPherson.” She adds, “Our daughter, Tonja, prepared a delicious Mexican soup and the rest of us took care of the desserts and extras. We had a very blessed Christmas.”

Sherry Smiddy reported that a friend at Ocean Spray contacted her about donating canned goods to the Tira Food Pantry. Sherry picked the items up on Thursday, December 26th, and some of the council members met her at the Community Center to unload them. We want to express our appreciation for the contribution.

Laiken Joslin met Dixie and her mom, Brianna, on Saturday, December 21st, and brought Dixie back to spend a few days with the family. Landon, Laiken, and the kids went to Cooper and had pictures made with Santa and one of his reindeer. Later that evening they went to see the lights at Santa Land near Lindale. Laiken’s brother, Kasen, went with them and they had a great time!

Chip and I traveled to Arkadelphia, Arkansas on Saturday, December 21st, to watch our granddaughter, Jaidyn Joslin, play basketball. Her team did well and they won, 17-2. Jaidyn’s dad, Malcolm Joslin, and his friend, Melinda, were there, too, along with our daughter and son-in-law, Tiffany and Perry Gilbert. After the game, we all went to Cracker Barrel for a late breakfast, and then Jaidyn went with Malcolm and Melinda to Beaver’s Bend for a few days. Chip and I came back by way of Broken Bow, Oklahoma and visited Jim, Sandra, Johnny, and Cindy Vaughn. Jaidyn returned on Christmas Eve and Tiffany arrived, from Malvern, Arkansas, that day, too. They went with us to the Christmas Eve Candlelight Service at First Baptist Church in Sulphur Springs that evening. (Perry did not get to come, because of his work schedule.) On Christmas Day, our family had lunch and opened presents. Those attending were Grace Vaughn, Tiffany and Jaidyn, Delayne Vaughn, from Waco, Landon, Laiken, Dixie, Rylan, Brailon, and Slaiden Joslin, Kenden Joslin and his friend Emma Hall, Malcolm, Melinda and her children, Shayle and Ben.  Morgan Joslin was working (in Tulsa) and couldn’t be with us. We are planning to visit him soon.

To Till or Not to Till: Study examines producers’ decisions on soil health practices