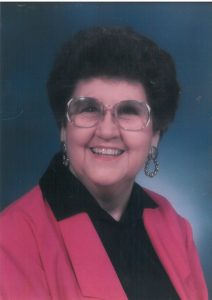 Joan Cockerell, age 92, of Sulphur Springs, went to be with her Lord and Savior on Wednesday, December 11, 2019 at home surrounded by her family and friends.  A Memorial and inurnment will be held at a later date in Balmorhea, TX.

JoanJones was born in Balmorhea, Txon December 9, 1927. She grew up the daughter of Henry Jones (Farmer) and Winnie Davis Jones (Housewife).She raised 3 children (Mickie Cockerell Wilson, Debbie Cockerell, and Buster Cockerell.) She has 8 grandchildren and 5 great grandchildren. Joan was also a member at the Methodist Church in Tom Bean, TX.She retired as a Circuit Board Assembler with Texas Instruments, after 25 years.Joan enjoyed dancing at her free time, and she liked dancing Line Dancing as well as Square Dancing. She was involved in making circuit for smart bombs during Gulf War.