TEXAS A&M-COMMERCE FOOTBALL: No. 21 Lions playoff run comes to a close with 42-21 loss to No. 4 Minnesota State in Regional Final 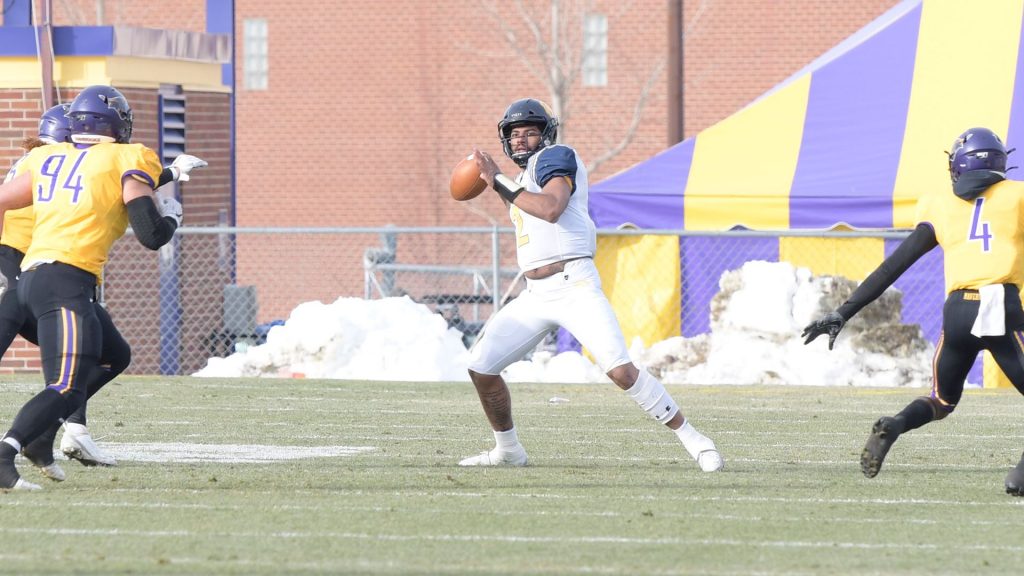 MANKATO, Minn. – The No. 21 Texas A&M University-Commerce football team saw its fifth straight trip to the NCAA Division II Playoffs come to a close with a 42-21 loss to No. 4 Minnesota State in the NCAA Division II Regional Championship game on Saturday at Blakeslee Stadium. After a close first half, the Lions fell behind in the second half and could not recover.

The loss drops the Lions to 11-3 on the season and their season comes to a close with their fourth consecutive 10-plus win season and the fourth straight playoff run to at least the regional semifinal round. The Lions senior class of 2019 completes their collegiate careers with a school-record 49 victories – six more than the next-closest class. The Mavericks improve to 13-0 and advance to the National Semifinal game.

INSIDE THE BOX SCORE
– Miklo Smalls (Plano – East Senior) finished the game completing 20-of-40 passes for 276 yards and a touchdown. Preston Wheeler (Austin – Bowie) completed 4-of-5 passes for 70 yards and a touchdown.
– Kelan Smith (Dallas – First Baptist Acad.) caught the touchdown pass from Smalls in the first quarter. He finished with 96 yards on a team-high eight catches.
– Chance Cooper (Leander – Rouse) led the team with 114 yards receiving on seven grabs.
– Tyler Guice (Atlanta, Ga.) caught Wheeler’s touchdown pass late in the fourth quarter.
– Christian Wise (Houston – Bellaire) recovered a fumbled punt return in the end zone in the first quarter for the Lions’ second touchdown.
– Dominique Ramsey (Converse – Judson) was the leading rusher, gaining 26 yards on the ground.
– Terrell Collins (St. Louis, Mo.) led the defense with 12 tackles and the team’s lone sack.
– Minnesota State rushed for 277 yards in the game, while the Lions had just 64 yards rushing. The Lions had 346 passing yards and held MSU to just 45 yards through the air.

HOW IT HAPPENED
The Mavericks took the opening kickoff and drove down the field right away, mainly on the ground. Running back Nate Gunn had a 43-yard run to drive into Lion territory and the Mavericks punched the ball in for the first score of the game.

The Lions immediately returned the favor on their first drive of the game, mainly through the air. Smith had a pair of grabs on the drive to move the chains and was then on the receiving end of a 22-yard catch-and-run, which he took to the pylon for a score tying the game at 7-all with 8:49 left in the first quarter.

Defenses began to take over the game, as the Lions forced two consecutive punts but were held to punts on their own drives. On the Lions’ second punt, the Maverick returner could not handle the punt, and the ball popped off his hands and into the end zone. Wise, rushing down to cover, saw the ball and pounced on it, recovering the fumble in the end zone for a touchdown. The Lions led 14-7 entering the second quarter.

The Mavericks continued their ground-and-pound offense, and again had success. Gunn had a long run and finished the drive with a three-yard run to tie the game early in the second quarter. After a Lion punt went short in swirling winds, the Mavericks had a short field and took advantage, again using their ground attack. Quarterback J.D. Ekowa was the one to find the end zone, giving MSU a 21-14 lead midway through the quarter.

After a Lion interception on their next drive, the Lion defense forced a three-and-out to give the ball right back to the offense. The Lions again found their rhythm, driving the field with the legs and the arm of Smalls. The Lions drove near the red zone but a penalty and some stuffed runs stalled the drive, and the Lions went into halftime trailing 21-14.

The teams traded punts twice to begin the second half as the defenses ruled early in the half. On their third drive of the half, the Lions tried some trickery, as a throw was lateraled to Childers, who looked to pass himself. The pass went back to the left but straight into the hands of Maverick defender Alex Goettl, who raced to the end zone to give MSU a 28-14 lead, which is where the quarter ended.

The Mavericks again found the end zone early in the fourth quarter to push their lead to 35-14 with 12 minutes left. The Lions continued to fight, as a long pass from Smalls to Guice put the Lions in the red zone. However, they could not find the end zone as the Maverick defense brought the house multiple times and played tight coverage, forcing a turnover on downs.

One more rushing attack drive by the Mavericks pushed their lead to 42-14. The Lions put together one final scoring drive, as Wheeler entered the game for one final career drive. He completed a pair of short gainers, before finding Ryan Stokes (St. Louis, Mo.) for a 52-yard gain. Wheeler then found Guice for a two-yard touchdown to finish the Lion scoring.