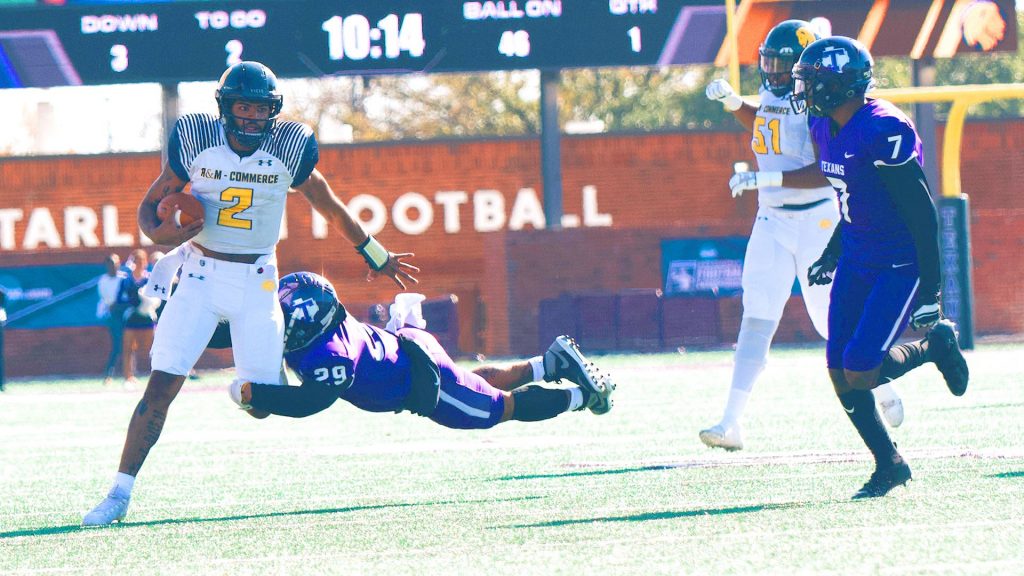 The Lions move to 10-2 overall on the season and advance to the regional semifinal round for the fourth consecutive year with the win. Tarleton’s final season in Division II ends at 11-1, as the Lions snapped Tarleton’s 13-game home winning streak.

A&M-Commerce moves on to take on Colorado School of Mines, who is the third seed in Super Region Four. The Orediggers are 12-0 after defeating Sioux Falls, 24-21, on a late field goal on Saturday. Kickoff in Golden, Colo., is set for Noon MST (1 p.m. CST) on Saturday, November 30.

A&M-Commerce is the only unseeded team remaining in Super Region Four. The other regional semifinal will feature fourth-seeded Colorado State-Pueblo at top-seeded Minnesota State.

INSIDE THE BOX SCORE
– The Lions had the superior offense, defense, and special teams in the game, outgaining the Texans 421 yards to 330.
– Quarterback Miklo Smalls (Plano – East Senior) was outstanding with both his arm and legs,  carrying the ball 16 times for 126 yards and completing 12-of-23 passes for 197 yards with one interception.
– Jemal Williams (Inglewood, Calif.) had 14 carries for 67 yards and a touchdown, and Antonio Leali’ie’e (Copperas Cove) had a rushing touchdown.
– Chance Cooper (Leander – Rouse) had three receptions for 103 yards.
– Kader Kohou (Euless – Trinity) averaged 18.25 yards on four punt returns.
– Jake Viquez (Rockwall) made field goals of 46, 32, and 41 yards and also made both PAT attempts.
– Terrell Collins (St. Louis, Mo.) led the Lions with 11 tackles, including two of the Lions’ five sacks.
– Elijah Earls (San Antonio – Stevens) had 2.5 sacks, three tackles for loss, two quarterback hurries, and a forced fumble.
– The Lions have now won seven of their last eight NCAA Division II Championship games.
– A&M-Commerce’s senior class now has a playoff record of 8-2 in the last four years (2016-19), and ties the Lone Star Conference record for the most playoff wins in a four-year span.

HOW IT HAPPENED
The Lions took the opening kickoff and Smalls was intercepted on third down in Tarleton territory. The Lion defense held strong on the ensuing drive, allowing only one yard, but the Texans’ converted on a 44-yard field goal to go ahead 3-0 with 12:17 left in the opening period.

On the ensuing drive, Smalls used his arm and legs to keep the drive alive. He completed a 26-yard pass to Cooper on a first-and-15, then rushed for 18 yards on a third-and-2. Leali’ie’e used a great cutback move to burst free for an 11-yard touchdown and give the Lions the lead at 7-3 with 8:08 left in the first quarter. The score made it the first time this season Tarleton had trailed at home.

The Texans responded with an 11-play, 75-yard drive that featured a pair of third down conversions and a fourth down conversion. A 23-yard touchdown pass from Ben Holmes to Camron Lewis at the 4:59 mark of the first quarter put the home team back ahead at 10-7.

A&M-Commerce tied the game up on the first play of the second quarter with Viquez’ 46-yard field goal capping an 11-play drive. The highlight play of the drive came on Smalls’ 29-yard completion to Cooper on a third-and 24 play.

The Lion defense forced the Texans to punt on their next three drives, including a pair of three-and-outs. Viquez hit a 32-yard field goal with 8:10 to play in the half to put the Lions ahead 13-10.

Tarleton had a chance to tie the game before the break thanks to a long completion, but the 39-yard field goal attempt was pushed wide left to send the Lions to the dressing room with a halftime lead.

The start of the second half saw another important Lion defensive stop, as A&M-Commerce stopped Tarleton just short of the redzone and limited the Texans to a field goal attempt, which was also pushed wide left. The next Lion drive saw Smalls complete passes to Kelan Smith (Dallas – First Baptist) and Christion Brewington (Chandler, Ariz.) to get into the redzone. A penalty pushed the Lions backward, but Viquez’ 41-yard field goal attempt was true, and the Lions led 16-10 with 7:14 left in the third quarter.

The home team narrowed the deficit back to three points on its next drive, but a fantastic individual effort allowed the Lions to extend the lead. On second-and-10 from the Lion 25, Smalls ran right for 60 yards, and was finally pushed out at the Texan 15. Two plays later, Williams powered for a 9-yard touchdown run, making it a 23-13 Lion lead at the 3:12 mark of the third quarter.

The fourth quarter featured multiple long drives, but the Lions’ defensive efforts were the highlight. Tarleton received the ball on a punt with 6:58 to play, still trailing by 10. With their season on the line, Tarleton’s offense converted on long plays on third and fourth down, and made it down to the Lion 1-yardline. On first-and-goal, Earls and Alex Shillow (Pflugerville) teamed up for a tackle for loss. The second down pass to the corner of the endzone was incomplete, and a third down scramble by the quarterback was stopped at the line of scrimmage. Tarleton kicked a short field goal to cut the lead to 23-16, but the drive had taken over five minutes off the clock and there was only 1:45 remaining.

Tarleton attempted the onside kick, and a TSU penalty gave the ball to the Lions, who were able to pick up a pair of first downs and run out the clock on another playoff victory.