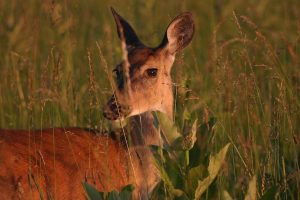 What is Chronic Wasting Disease?

CWD is a progressive neurological disease that affects several cervid species. The CWD susceptible species are white-tailed deer, black-tailed deer, mule deer, elk, red deer, reindeer, sika and moose. Since it was first reported in 1967, it has been documented in both captive and free-ranging cervid species in 25 states and three Canadian provinces.

CWD has gained some attention in recent years as reports of a “zombie deer disease” surfaced and spread across various media outlets. Although catchy, “zombie deer disease” is actually a misnomer since animals afflicted with CWD aren’t dead. Once affected, it may take two to four years for the infected animal to begin exhibiting clinical signs, which may mimic “zombie-like” behavior as the disease progresses. Affected animals exhibit signs such as weight loss, drooling, stumbling and stupor. This combination of clinical signs culminates in an animal that appears to “waste away,” coining the actual name of the disease.

Similar to bovine spongiform encephalopathy, BSE, in cattle and scrapie in sheep and goats, CWD is a naturally occurring transmissible spongiform encephalopathy, TSE, or prion disease. Prions are abnormal proteins and extremely difficult to destroy. Once infected, the prions initially affect the animal’s lymph nodes and after spreading through the body, eventually infect the brain.

In 2012, CWD was first discovered in Texas in free-ranging mule deer in the Hueco Mountains. Since then, the disease has continued to be detected in the West Texas and Panhandle regions in mule deer, white-tailed deer and elk.

Although Texas’ history of CWD has been short compared to other states, diagnostic testing continues to increase as state agencies attempt to control the disease. In Texas, TVMDL is the only laboratory approved to test for CWD.

CWD Submitters: Who Are They?

Last year, TVMDL performed approximately 26,500 CWD tests. Of the total number of tests, almost half were performed from October to December. This increase in CWD submissions coincides with deer hunting season in Texas.

Hunters must adhere to certain guidelines during deer season due to Texas Parks and Wildlife Department, TPWD, programs aimed at mitigating the spread of CWD. For example, if a deer is killed in a CWD-quarantined zone, samples must be collected and submitted for CWD testing. Sample collection is conducted at hunter check stations, deer-processing facilities and, sometimes, taxidermists.

CWD test requests are submitted by state agencies, like TPWD and the Texas Animal Health Commission, TAHC, and deer breeders. TVMDL provides service to these agencies and the deer industry to assist with ongoing efforts to track the spread of diseases like CWD.

Once at the laboratory, TVMDL tests samples through one of two methods: enzyme-linked immunosorbent assay, ELISA, or immunohistochemistry, IHC. Both test methods require tissues retrieved from either a deer’s lymph nodes or obex.

The most requested method is the ELISA test. This method is the more sensitive option because it uses fresh tissues as opposed to tissues fixed in a preservative agent. The entire process, excluding sample preparation time, typically takes about three hours. Once a sample arrives in the serology section at TVMDL, it will begin the first of three phases: sample preparation.

During sample preparation, precise volumes and anatomical locations of lymph node and/or obex tissues are cut and placed into unique grinding tubes. The tubes are placed on a homogenizer instrument that liquefies the tissues and prepares them for the second phase of testing, purification.

The purification phase is semi-automated. A liquid handling instrument begins with processing the sample. This process digests normal prions using Proteinase K and leaves behind disease-causing prions, if any are present. Afterward, the liquid end product of the purification process is centrifuged to form a pellet. The pellet is treated a second time and then diluted. The pellet will then move on to the final phase of testing and determine if any CWD prions are present.

Detection is the final phase of the ELISA testing process. In this phase, the diluted sample pellet is tested using a sandwich ELISA. A sandwich ELISA uses two layers of antibodies to determine the concentration of a particular antigen, in this case the CWD prion. A color-changing substrate is added during the process as a visual indicator of the presence of CWD prions in the sample. If a sample develops a significant color change, it is considered an “initial reactor,” IR, and is retested. IR samples that still indicate the presence of CWD prions after retesting are forwarded to the U.S. Department of Agriculture – Animal and Plant Health Inspection Service, USDA-APHIS, National Veterinary Services Laboratory.

TVMDL’s second CWD testing option, IHC, uses fixed or preserved tissues. If tissues arrive at TVMDL fresh or not well fixed, a day is added to the process to allow time for the tissues to be fixed in formalin until they are ready for testing.

Once well fixed, tissues are placed into individually labeled plastic cassettes. The cassettes are necessary for the following step in which tissues are processed for about 13 hours. During this time, tissues are dehydrated, and all the water is replaced with paraffin wax to preserve the tissue’s cell structure.

After processing, tissues are embedded in a paraffin wax mold to prepare them for sectioning using a microtome. This instrument slices the wax tissue block into 5-micron thick sections, thinner than a strand of human hair.

The thin section of tissue is mounted onto a glass slide. After drying overnight, the glass slides are prepared for staining. The slides are treated to remove the paraffin and ensure antigen binding sites are available during the staining process. This process identifies CWD antigens in the tissue by binding an anti-prion molecule to the CWD antigen in positive tissue and then binding a red chromogen to that molecule.

This semi-automated staining process takes approximately six hours total; two hours of manual labor and four automated hours. During this timeframe, the three staining instruments can stain 90 glass slides. When staining is complete, all slides are coverslipped and given to TVMDL pathologists who microscopically inspect each slide for the presence of CWD.

Similar to the ELISA test method, if a sample is suspected of having CWD, it is sent to the National Veterinary Service Laboratory in Ames, Iowa for confirmatory testing and a final diagnosis.

Although other laboratories across the U.S. offer CWD testing, TVMDL sets itself apart through its dedication to the individuals in the Texas deer industry. The agency works closely with other state agencies and deer breeders to establish working relationships and personal connections.

For more information about CWD testing at TVMDL, visit tvmdl.tamu.edu or call the College Station laboratory at 1-888-646-5623.