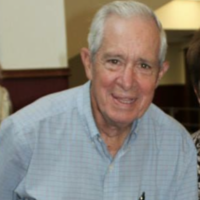 Funeral services for Roger Sowell, age 76, of Cumby will be held Thursday, November 14, 2019 at 11 am at League Street Church of Christ with Jerry Savage officiating.  Visitation will be held before the service at 10 am.  Interment with military honors will immediately follow at Ridgeway Cemetery.  Pallbearers will be Ron Sowell, Lyn Gill, Matt Moody, Josh Poe, Don Cooper, and Garry Kraus.  Mike Finley will serve as Honorary Pallbearer.

Roger served in the U.S. Army during the Vietnam War in Pleiku, from March 1964-1965.  He was always reluctant to talk about Vietnam to his family, but we do know he was awarded the Army commendation medal with “V” device which is given for an act of heroism by an individual above what is normally expected while engaged in direct combat with an enemy.  From his time there, he developed a life-long love and interest of helicopters and all aircraft, and therefore, spent his civilian life working in the aircraft industry.

Arrangements are under the direction of Jones-Walker and Son Funeral Home of Commerce, Texas.