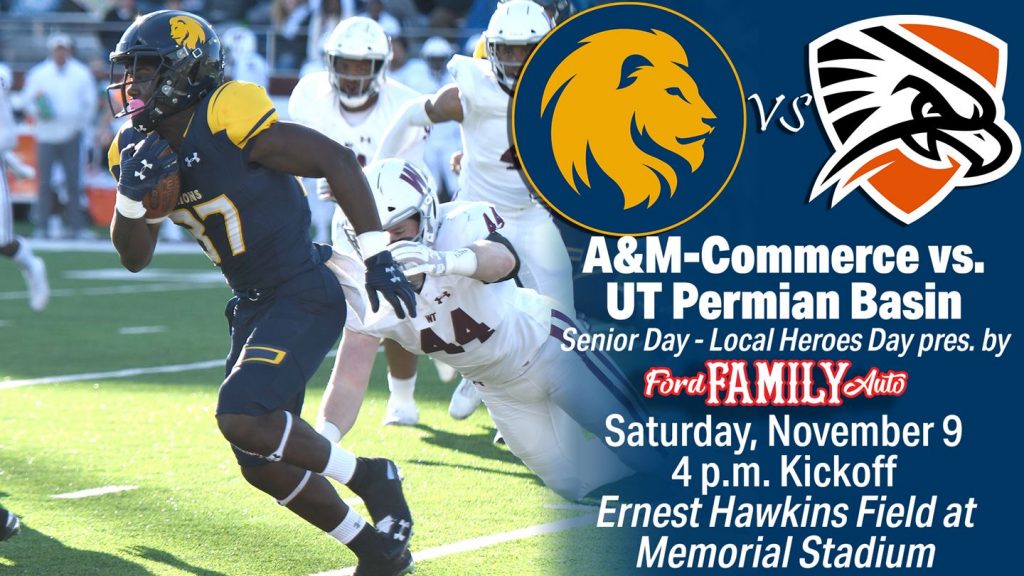 WHO: The University of Texas of the Permian Basin at Texas A&M University-Commerce
WHERE: Commerce | Ernest Hawkins Field at Memorial Stadium
WHEN: 4 p.m. on Saturday, November 9
RECORDS: A&M-Commerce is 7-2 overall and 5-1 in the Lone Star Conference after defeating West Texas A&M, 34-20. UT Permian Basin is 3-6 overall and 1-5 in the LSC with a 48-38 win over Eastern New Mexico.
RANKINGS: A&M-Commerce is ranked No. 24 in the AFCA Coaches’ Poll and No. 23 in the D2Football.com Media Poll.

ALL-TIME vs. THE FALCONS
•  The Lions and Falcons are meeting for the fourth time overall and second in Commerce.
• A&M-Commerce is 3-0 vs. UTPB.
• The first-ever meeting in 2016 was truncated to a three-quarter game in Odessa with lightning infringing on the contest. The Lions won that game 58-21.
• In the only meeting at Memorial Stadium, the Lions rolled to a 52-0 victory in Commerce in 2017, on the dedication game of Ernest Hawkins Field.
• In 2018, the Lions had nine sacks, 14 tackles for loss, and held the Falcons to minus-69 yards rushing in Odessa, as A&M-Commerce earned a 20-17 win over UTPB.

LIONS CONTINUE RANKINGS RUN
• The Lions held their grip in the top 25 at No. 24 nationally in the 2019 American Football Coaches Association Division II Coaches’ Poll released Monday.
• A&M-Commerce has been ranked in 62 consecutive AFCA polls, dating back to the 2015 preseason poll.
• This is A&M-Commerce’s 68th all-time appearance in the AFCA poll since its inception in 2000.
• In the polls recognized by Division II as the top rating system, the Lions have been recognized as a nationally ranked team 117 times since joining Division II in 1981.

NO SMALLS FEAT
• Quarterback Miklo Smalls has established himself as one of the most accurate efficient passers in the LSC and Division II.
• Smalls has won the LSC Offensive Player of the Week award three times, including last week’s performance at West Texas A&M.
• He completed 18-of-28 passes for 214 yards and a touchdown, and also ran for a touchdown. He was responsible for both touchdowns in the fourth quarter, which broke a 20-all tie.
• At Tarleton, he had season highs with 29 completions, 39 attempts, and 288 yards.
• Against Midwestern State, Smalls completed 70.3 percent of his passes in the game with five touchdown passes and 186 yards through the air. He also had 24 rushing yards.
• He completed passes to nine different receivers, and all five touchdowns were caught by different receivers.
• He also won Lone Star Conference Offensive Player of the Week honors for his game against Eastern New Mexico, completing 13-of-15 passes for 243 yards with four touchdowns and one interception.
• His passing efficiency rating of 297.413 in that game is the second-best single-game performance by a quarterback in Division II this season.
•His 86.7 completion percentage in the game is seventh-best in the nation this year of passers with 15 or more attempts in a game.
•His 70.7 percent (159-of-225) completion percentage for the season ranks sixth in Division II.
• Smalls ranks 13th in the nation in passing efficiency at 165.4.
• He also ranks in the top 25 nationally in completions per game, passing touchdowns, passing yards per game, and yards per pass attempt.

RAMSEY IS ELECTRIC
• Junior defensive back and return specialist Dominique Ramsey has been one of the most electric players in all of Division II whenever he touches the ball.
• He is a double major student-athlete in mathematics and electrical engineering.
• He won his second LSC Special Teams Player of the Week honor for the Western New Mexico game, thanks to a 91-yard kickoff return for a touchdown.
• He now ranks second in the nation in kickoff return average at 37.5 yards per return. He was not given an opportunity to return a kickoff at West Texas A&M.
• He also ranks second in the LSC and sixth in the nation in punt return average at 14.9 yards per return.
• In the Midwestern State game, he recorded 150 all-purpose yards, including a highlight reel 65-yard kickoff return to open the game and set the Lions’ first score up on a short field. He also dazzled on two scintillating punt returns. The Lions scored within five plays after each of his kick and punt returns.
• All told, Ramsey had 65 kick return yards, 48 punt return yards, 14 interception yards, 15 rushing yards, and 8 receiving yards.
• He had two interceptions in the game, including a key snag in the end zone near the end of the first half to snuff out an MSU scoring threat which would have narrowed the deficit in a key spot. He also had an interception to help seal the game in the fourth quarter. He also made five key tackles in open space on the perimeter to limit MSU yards after the line of scrimmage.
• At Tarleton, he had a 55-yard kickoff return on the way to 112 return yards with 95 kickoff return yards and 17 punt return yards. He also had eight tackles.
• Earlier this season, his 55-yard punt return for a touchdown in the ENMU game earned him Lone Star Conference Special Teams Player of the Week honors.

• He now has six career returns for touchdowns:

JAKE IS THIS YEAR’S MR. AUTOMATIC
• Junior kicker Jake Viquez extended his career-long in field goals with a 44-yarder at CSU-Pueblo.
• For the season, he is 7-of-9 on field goal attempts and 37-of-39 on PAT attempts.
• His 7.4 kicking points per game ranks second the LSC.
• He has also been fantastic on kickoffs, as the Lions rank in the top 10 in the nation in kickoff return defense.

THE “T” IN T.C. STANDS FOR TACKLES
• Senior linebacker Terrell Collins leads the Lions with 57 total tackles this year.
• His 7.1 tackles per game has moved him into the ranking of top tacklers in the Lone Star Conference.
• He ranks 11th in the LSC in tackles per game.

RUN ANTONIO RUN!
• Redshirt junior running back Antonio Leali’ie’e has made the most of his opportunity to contribute after rising through the lineup due to injuries to other backs.
• He ranks fifth in the LSC in rushing at 75.8 yards per game, and he ranks third in the league in yards per carry at 7.0 yards per tote.
• He has gone over 100 yards rushing in three of the last five games.
• Against Western New Mexico, he had two rushing touchdowns on 17 carries for 133 yards.
• Lealiiee has scored at least one touchdown in each of the last six games.
• Running backs coach Jack Welch was Leali’ie’e’s high school coach at Copperas Cove.

ON NOVEMBER 9 IN LION FOOTBALL (5-4)
• 1928 – East Texas squeaks by North Texas, 13-12, at home.
• 1957 – The Lions earn their fourth straight win of the year with a 19-12 home victory over Stephen F. Austin.
• 1963 – ET is tripped up at home by Southwest Texas State, 24-16.
• 1968 – The Lions drop a 24-21 decision on the road to Sam Houston State.
• 1974 – East Texas picks up a 21-10 win in the Big Bend over Sul Ross State.
• 1985 – A trip to the Concho Valley ends in defeat for the Lions, as Angelo State earns a 28-24 win.
• 1991 – The Lions battle to a 39-39 tie with Angelo State in Memorial Stadium. East Texas fell behind by a 21 points in the first quarter, then scored a school-record 32 points in the second quarter. That record would stand until the Western New Mexico game in 2018. A late field goal attempt was missed and a game-winning Hail Mary was wiped off the board by a penalty. This is the last tied game in Lion football history.
• 1996 – A&M-Commerce is narrowly defeated by Angelo State at home, 35-32.
• 2002 – The Lions ware edged at home by Angelo State, 17-16.
• 2013 – The Lions dominated Division I FCS opponent Houston Baptist, notching a 55-21 victory over the Huskies in Houston. Vernon Johnson became the program’s single-season receiving leader. A&M-Commerce finished the day with 545 yards of total offense, 474 of which came through the air, highlighted by a career day for Harrison Stewart. The junior quarterback completed 23 of his 40 passes for 383 yards and five touchdowns, three of which went to junior wide receiver Seth Smith, who hauled in six catches for 115 yards.