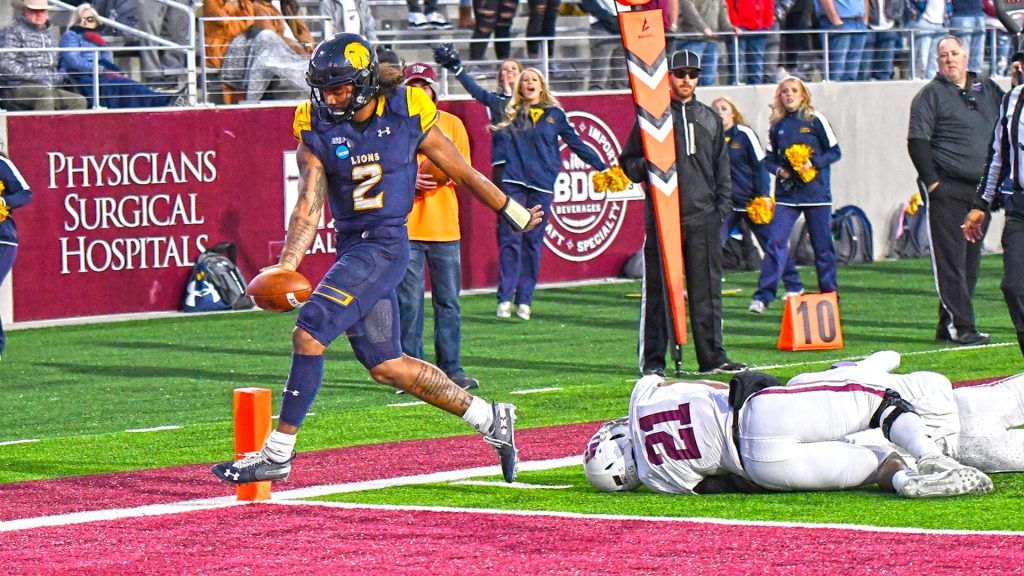 The Lions move to 7-2 overall on the season and 5-1 in the Lone Star Conference, while the Buffaloes fall to 6-3 overall and 3-3 in league play. The win is the Lions’ sixth consecutive win over WT.

A&M-Commerce closes out its home schedule on Saturday, November 9, at 4 p.m. when the Lions host UT Permian Basin for Senior Day and Local Heroes Day presented by Ford Family Auto. Tickets for the game are available at the box office, online at WeAreLionsTix.com, or by calling (903) 468-8756.

HOW IT HAPPENED
Both teams scored on their opening offensive drives. West Texas used 13 plays to go 75 yards and score on a 2-yard Logan Vallo touchdown carry. The Lions responded with a six-play, 64-yard scoring drive capped by Leali’ie’e’s 8-yard run with 6:50 left in the quarter.

On the Buffaloes’ ensuing drive, Chambers intercepted the first play of the drive and returned it 35 yards for a score. The PAT was blocked, making it a 13-7 Lion lead.

The A&M-Commerce advantage was pushed to 20-7 when Williams returned the blocked punt seven yards for a score with 14:08 left in the opening half. West Texas scored on a 28-yard touchdown pass on its next drive, and the 20-14 Lion lead would stand into halftime.

The Lion offense was unable to score in the third quarter, and the Buffaloes’ 19-yard touchdown with 3:25 to play in the period tied the game up at 20-all.

A&M-Commerce stood strong in its own territory early in the fourth quarter, turning the Buffs over on downs at the TAMUC 18-yardline. On the ensuing drive, the Lions took 10 plays to go 82 yards and take the lead. Smalls completed 7-of-7 passes on the drive, and his 11-yard scramble to the pylon put the points on the board for a 27-20 lead with 8:40 to play.

The Buffaloes’ next two drive ended in three-and-outs, and the Lions’ field position was aided by a 45-yard quick kick punt by Smalls. A&M-Commerce started its next drive at the WT 35-yardline and needed only two plays to put the game away. Smalls had an 11-yard carry to start the drive, then completed a 24-yard catch and run touchdown to Smith.

After the hosts converted on one fourth down opportunity to attempt to cut into the lead, the Lions stopped the second chance and ended the game with strong rushing attacks to run out the clock.

INSIDE THE BOX SCORE
– The Lions out-gained the Buffaloes 410 yards to 334, though they ran only 64 plays to WT’s 80.
– A&M-Commerce forced three turnovers, all on interceptions of West Texas passes. Felipe Chambers (Fair Oaks, Calif.) had a 35-yard interception return for a touchdown, while Dominique Ramsey (Converse – Judson) and Jalon Edwards-Cooper (Spring – Dekaney) each had picks.
– Miklo Smalls (Plano – East Senior) completed 18-of-28 passes for 214 yards and a touchdown. The quarterback also had eight carries for 36 yards and the go-ahead touchdown in the fourth quarter.
– Kelan Smith (Dallas – First Baptist) had four receptions for 46 yards and the game-clinching touchdown in the fourth quarter. Chance Cooper (Leander – Rouse) was the Lions’ top receiver with six catches for 63 yards.
– Jemal Williams (Inglewood, Calif.) had 14 carries for 80 yards, and Antonio Leali’ie’e (Copperas Cove) had nine carries for 62 yards and a score. Williams also scored on a return of a blocked punt.
– Terrell Collins (St. Louis, Mo.) led the Lions with 13 tackles, including two tackles for loss and 1.5 sacks.
– In addition to his interception, Edwards-Cooper broke up two passes. L.A. Dawson (Austin – LBJ) had four tackles and four pass breakups. Elijah Earls (San Antonio – Stevens) had six tackles with half a sack and was credited with the block on the punt.