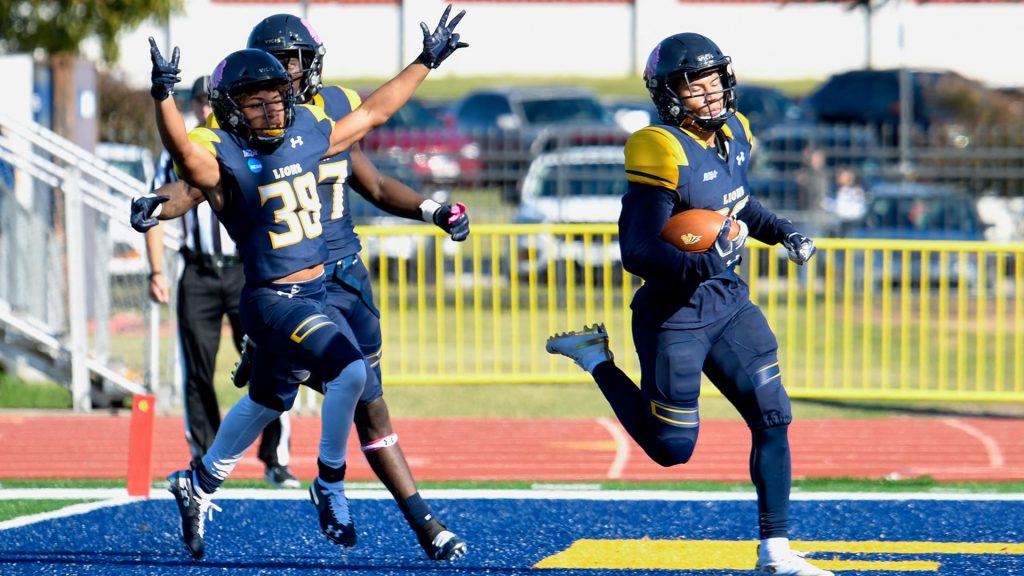 COMMERCE – The No. 23 Texas A&M University-Commerce football team thrilled the Homecoming crowd with a 62-21 rout of Western New Mexico University at Ernest Hawkins Field at Memorial Stadium on Saturday.

With the win, the Lions move to 6-2 overall and 4-1 in the Lone Star Conference, winning on Homecoming weekend for the sixth straight season. The Mustangs fall to 1-7 overall and 1-4 in league play.

The Lions are on the road next week for a 4 p.m. kickoff on Saturday, November 2, at West Texas A&M on ESPN3 in the NCAA Division II Football Showcase game.

INSIDE THE BOX SCORE
– The Lions had 30 first downs and 562 yards of offense, averaging 8.1 yards per play.
– Miklo Smalls (Plano – East) completed 18-of-28 passes for 282 yards with three touchdowns and two interceptions
– Antonio Lealiiee (Copperas Cove) scored two of the Lions’ five rushing touchdowns, carrying the ball 17 times for 133 yards. Chris McPhaul (Frisco – Liberty), Jemal Williams (Inglewood, Calif.), and Jaquorious Smith (Kilgore) each had a rushing touchdown.
– Ryan Stokes (St. Louis, Mo.) had five receptions for 110 yards and two touchdowns. Jemal Williams also had a 36-yard receiving touchdown.
– Dominique Ramsey (Converse – Judson) electrified the crowd with a 91-yard kickoff return for a touchdown. He now has six return touchdowns in his career with his first of the kickoff variety.
– Sammy Gray (Elk Grove, Calif.) led the Lions with six tackles. Elijah Earls (San Antonio – Stevens), Neema Behbahani (Plano), Dayne Douglass (Canyon), Chris Williams (Atlanta, Ga.), Pierre Leonard (Tyler – John Tyler), Tali Amosa (Melbourne, Australia), and Jalon Edwards-Cooper (Spring – Dekaney) were all in on sacks.
– The Lions string of made PATs dating back to the second game of the 2017 season was snapped at 129 in the first quarter when a PAT attempt hit the right upright after Ramsey’s return.

HOW IT HAPPENED
The Lions forced the Mustangs to punt on the game’s opening drive and immediately went to work to move the ball downfield. A seven-play, 76-yard drive was capped at the 9:44 mark of the first quarter when Smalls connected with Stokes for a 21-yard touchdown strike.

Western New Mexico intercepted a Smalls pass to set up a four-play scoring drive to tie the game at the 2:48 mark of the first quarter, but Ramsey nearly immediately unknotted the score with his weaving 91-yard kickoff return for a score to put A&M-Commerce had 13-7 with 2:30 left in the quarter.

On the third play of the second quarter, Smalls found Jemal Williams leaking out of the backfield, and the converted linebacker scampered 36 yards for a touchdown, extending the lead to 20-7 with 14:21 left in the half. That lead was pushed to 27-7 with 6:58 to play in the half when Lealiiee finished off an 11-play, 76-yard drive with a 5-yard touchdown plunge.

The Mustangs strung together a long drive to end the half and were threatening to score, but Edwards-Cooper blocked a field goal attempt and the score stayed at 27-7 to end the half.

Smalls was a perfect 4-for-4 passing on the first drive of the second half, and his 30-yard touchdown pass to Stokes with 12:54 to play in the third quarter extended the lead to 34-7. A poor snap on a punt attempt by WNMU left the Lions with a short field, and Lealiiee’s 4-yard touchdown run made it a 41-7 lead at the 10:16 mark of the third quarter.

Western cut into the lead with a long touchdown pass on the next drive, and a Smalls pass was intercepted in the endzone. The defense held strong and got the ball back to the Lions and Jemal Williams pushed the lead to 48-14 with a 7-yard scoring run on the first play of the fourth quarter.

The Lions were able to extend the lead on their final two drives of the game, as McPhaul had a 49-yard run to set up his 8-yard touchdown carry, and Smith went 19 yards for a touchdown on his only touch of the game.