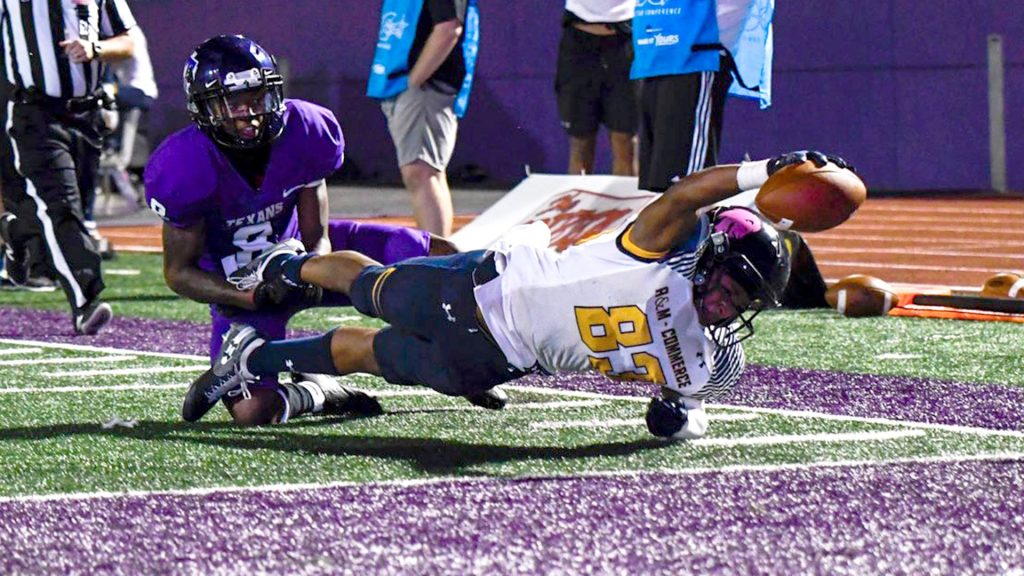 STEPHENVILLE – The 20th-ranked Texas A&M University-Commerce football team fell behind by two scores in the first quarter to fourth-ranked Tarleton State University on Saturday, and the Lions were unable to climb back from that deficit in a 35-21 loss.

The Lions fall to 5-2 overall and 3-1 in the Lone Star Conference with the loss, while the Texans move to 7-0 overall and 5-0 in league play.

The Texans scored twice in quick succession to open the first quarter. The opening score came after an 8-play, 80-yard drive, and the second came on a return after a Lion pass was ruled to have gone backwards, thus resulting in a fumble. Tarleton led 14-0 with 7:31 to play in the first quarter.

A&M-Commerce settled the game down quickly, thanks in large part to Kohou’s strip and recovery in the Lion red zone. After the teams exchanged punts twice and headed to the second quarter, the Lions got on the board with a 5-play, 46-yard drive set up by Ramsey’s 17-yard punt return. A 29-yard reception by Lealiiee moved A&M-Commerce into the red zone, and the redshirt junior would punch the ball in from two yards out with 6:03 left on the first half clock to cut the lead to 14-7.

Tarleton used three big plays on a 7-play, 80-yard drive to respond with a score and that 21-7 margin would stand going into halftime.

The Lions stole momentum on the opening drive of the second half, when Jemal Williams (Inglewood, Calif.) blocked a Texan punt and A&M-Commerce recovered at the Tarleton 14. After being backed up by penalties, Smalls connected with Smith from 18 yards out, and Smith’s third effort dive for the pylon gave the Lions the score, cutting the lead to 21-14 with 10:16 left in the third quarter.

On the ensuing drive, Tarleton converted on three third downs, with the final conversion coming from close range on a 2-yard touchdown pass to push the lead to 28-14.

A 55-yard return by Ramsey set A&M-Commerce up well on the next drive, and a 22-yard scamper by Smalls put the Lions in prime position, but a pass was intercepted at the goal line to snuff out the drive. The Texans proceeded to march 92 yards downfield and score on a 39-yard pass play with 14:21 to go to make it a 35-14 margin.

The Lions responded well, as completions on third down twice moved the sticks for A&M-Commerce. Smalls found Matt Childers (Henderson) in the corner of the endzone from 19 yards out to cut the lead to 35-21 with 10:41 to play.

Viquez’ onside kick went undetected by the Texans and Gray recovered. Smalls had big completions to Smith and Eric Hebert (Manvel), but the drive bogged down at the Tarleton 10 and the Lions turned the ball over on downs.

A&M-Commerce held Tarleton to a three-and-out and got the ball back with just over five minutes to play, but a sack put the Lions behind the sticks and a big hit by Tarleton’s Jai Edwards jarred the ball free on a potential fourth down conversion, ending the drive.

Tarleton picked up two first downs on the final drive to run out the clock and maintain possession of the President’s Cup.

A&M-Commerce hosts its annual Homecoming game next weekend, as Western New Mexico comes to town for a 3 p.m. kickoff, with the game regionally televised on Nexstar channels throughout the Southwest. Tickets for the game are available at the box office, online at WeAreLionsTix.com, or by calling (903) 468-8756.