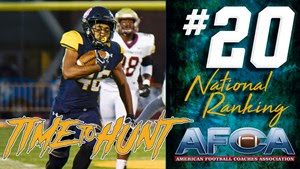 The Texas A&M University-Commerce football team is ranked No. 20 in this week’s American Football Coaches Association Division II Coaches’ poll, as announced by the AFCA on Monday.

The Lions are coming off of a 54-28 home win over rival Midwestern State last week. The Lions gained 501 yards of total offense, scoring a series-high 54 points against the Mustangs. Miklo Smalls (Plano – East Senior) threw for 186 yards and five touchdowns, all to different receivers. For his efforts, he was named the Lone Star Conference Offensive Player of the Week. Running back Antonio Lealiiee (Copperas Cove) also had a big day, rushing for 169 yards and a receiving touchdown. Safety Dominique Ramsey (Converse – Judson) had a pair of interceptions to lead the Lion defense, who had three takeaways in the game.

Five A&M-Commerce opponents in 2019 are ranked in the top 25 or receiving votes. Tarleton held at No. 4 in the nation, while CSU-Pueblo jumped to No. 15 this week. Angelo State also reentered the top 25 rankings, sitting at No. 25. West Texas A&M and Eastern New Mexico are also receiving votes in the poll.

A&M-Commerce has been ranked in 59 consecutive AFCA polls, dating back to the 2015 preseason poll. This is A&M-Commerce’s 65th all-time appearance in the AFCA poll since its inception in 2000. In the polls recognized by Division II as the top rating system, the Lions have been recognized as a nationally ranked team 114 times since joining Division II in 1981.

The Lions next head out on the road for a heavyweight game against No. 4 Tarleton on Saturday. The game will be played at 6 p.m. at Memorial Stadium in Stephenville.