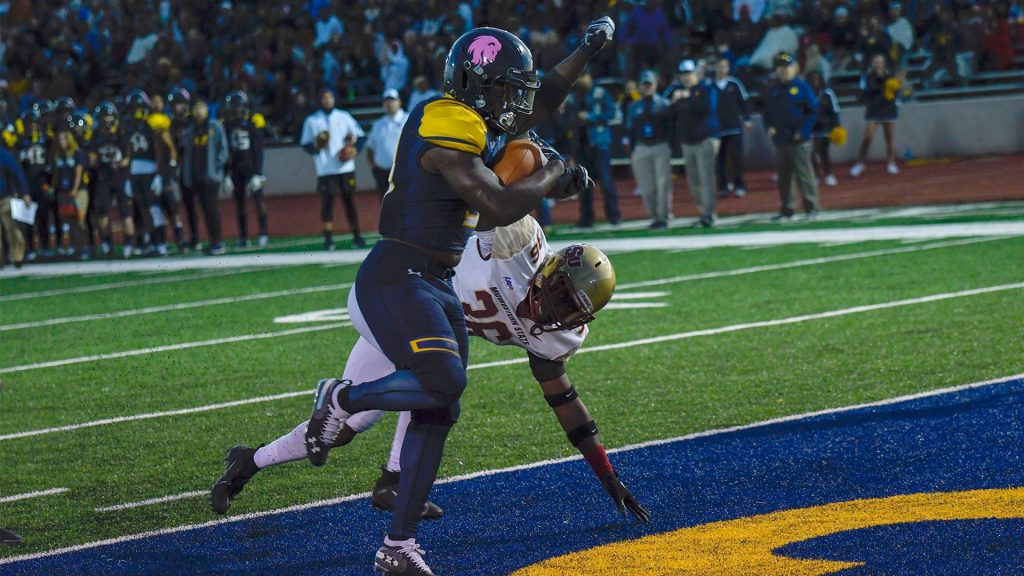 The No. 20 Texas A&M University-Commerce football team jumped out to an early 31-7 lead and earned a comprehensive 54-28 victory over Midwestern State in the NCAA Division II Showcase game on Ernest Hawkins Field at Memorial Stadium on Saturday night.

The Lions face a stern test next week, traveling to Stephenville for the President’s Cup matchup against No. 4 Tarleton. Kickoff is set for 6 p.m. on October 19.

INSIDE THE BOX SCORE
– Quarterback Miklo Smalls (Plano – East Senior) completed 19-of-27 passes for 186 yards and five touchdowns. He connected with nine different receivers and five receivers caught scoring passes.
– Antonio Lealiiee (Copperas Cove) had 18 carries for 169 yards, as well as three receptions for 14 yards and a touchdown.
– The Lions outgained MSU 499-400 and averaged 6.7 yards per play.
– Ryan Stokes (St. Louis, Mo.) was the Lions’ top receiver with six catches for 75 yards and a touchdown.
– Dominique Ramsey (Converse – Judson) was a dynamo in special teams and on defense, tallying 152 all-purpose yards with 65 kickoff return yards, 50 punt return yards, and 14 interception return yards. He had two interceptions and five tackles.
– Terrell Collins (St. Louis, Mo.) had six tackles with a tackle for loss, and Alex Shillow (Pflugerville) had five stops and a key fumble recovery.
– Jake Viquez (Rockwall) was spectacular in the kicking game, nailing field goals of 40 and 28 yards and making six PATs.
– With Viquez’ fifth PAT of the night, the Lions established the record for the most consecutive PATs made kicking at 125 and counting. The previous record was set by Liberty from 1978-83. The Lions have not missed a PAT with a successful snap and hold since week two of the 2017 national championship season.
– Andrew Gomez (Richardson) averaged 40.2 yards on four punts with a long of 51 yards.

HOW IT HAPPENED
The opening of the game set off as a back-and-forth battle, as Ramsey returned the opening kickoff deep into Mustang territory and the Lions scored five plays into the contest on Smalls’ 24-yard touchdown pass to Stokes.

Midwestern State responded with an uptempo drive, tying the game after 12 plays on a 3-yard touchdown pass from Triston Williams to Lazarus Fisher.

Big rushes set up the Lions’ next score, as Darian Owens (Fresno, Calif.) went for 24 yards and Lealiiee went for 34 yards to get into the redzone. Smalls found Kelan Smith (Dallas – First Baptist) from six yards out to put the Lions up 14-7.

On the ensuing kickoff, Viquez’ towering kick was midhandled by the Mustang receiver and recovered at the MSU 22-yardline by Shillow. The Lion drive ended in Viquez’ 40-yard field goal to make it a 17-7 contest.

The Lions held MSU to a failed fourth down attempt on the next drive before marching 78 yards in 14 plays for the next score. A Smalls-to-Lealiiee swing pass from two yards out pushed the Lion lead to 24-7.

After a Mustang three-and-out, Lealiiee’s 37-yard carry put the Lions in a goal-to-go situation and Carandal Hale (Greenville) punched it to paydirt from five yards out to establish a 31-7 advantage for the Lions.

Midwestern State scored on its next drive after a 75-yard drive, and the guests were threatening again when Ramsey snagged an interception in the endzone. The Lions maintained a 31-14 lead at the intermission.

After MSU scored on its opening drive on a 34-yard reception by Xavier Land to narrow the deficit to 10 points at 31-21, Ramsey’s scintillating returns on punts set up two fantastic scores. A 19-yard punt return put the Lions 33 yards away from the endzone and Eric Hebert (Manvel) scored a 7-yard touchdown catch to go up 38-21. The 45-21 advantage was gained after a 31-yard Ramsey return put the Lions at the MSU 43, and Smalls found Tyler Guice (Atlanta, Ga.) for a 30-yard score four plays later.

Viquez drilled a 28-yard field goal with 12:34 to play, extending the lead to an unassailable 48-21. The teams traded two more scores, as MSU surprised the Lions with a 57-yard touchdown pass, but TAMUC volleyed back with an eight-play drive capped by Spencer Long (Barbers Hill) on a 9-yard scoring plunge.

Midwestern attempted to rally back with a long ball, but Ramsey’s second interception of the night sealed the game and another successful night for the Lions at home.