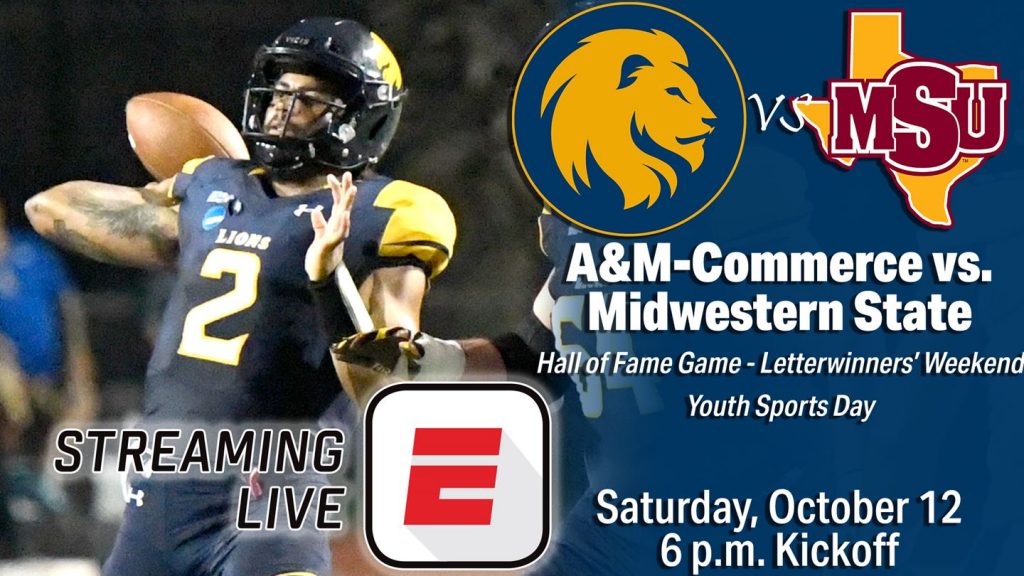 WHO: Midwestern State University at Texas A&M University-Commerce
WHERE: Commerce | Ernest Hawkins Field at Memorial Stadium
WHEN: 6 p.m. on Saturday, October 12
RECORDS: A&M-Commerce is 4-1 overall and 2-0 in the Lone Star Conference after defeating A&M-Kingsville, 33-6, winning the Chennault Cup for the eighth-consecutive season. Midwestern State is 3-2 overall and 1-2 in the LSC after falling to Eastern New Mexico, 27-24
RANKINGS: A&M-Commerce is ranked No. 20 in the AFCA Coaches’ Poll and the D2Football.com Media Poll. Midwestern State is receiving votes in the AFCA Coaches’ Poll.

LIONS GET NATIONAL EXPOSURE
• This is one of four television games for the Lions in the final six weeks of the season. This is the first on ESPN3 as part of the Division II Showcase Series, which has featured the Lions a lot in the last few years.
• The Lions have had at least one nationally televised game in each of the last five seasons.
• This is the second time the TAMUC/MSU game has been the Division II Showcase game. The Mustangs were 26-25 victors in that game.

LOOKING BACK AT THE 2018 GAME
• In the 2018 meeting between these teams, No. 9 A&M-Commerce defeated No. 4 Midwestern State, 20-19, in a game which spanned two days and two stadiums.
• The game started in Wichita Falls and was originally delayed at the start for approximately 45 minutes.
• The game was tied 10-10 when a second line of thunderstorms hit. The game was unable to be completed in Wichita Falls that evening.
• After lengthy consultation with both coaches and administrations, just before 1 a.m. Sunday morning, the schools were able to jointly announce the resumption of the game at North Texas’ Apogee Stadium in Denton at 2 p.m. Sunday.
• MSU was able to wear its home black uniforms in both halves of the game. The A&M-Commerce squad wore its white away uniforms in Wichita Falls, and its gold alternate uniforms in Denton.
• The Lions took a 20-17 lead with 11:22 to play after a 13-play, 98-yard touchdown drive.
• An errant punt snap was downed for a safety with 8:53 to play, allowing MSU to cut the lead to 20-19.
• Brandon Bascue blocked a 39-yard MSU field goal attempt with 3:15 to play, and the Mustangs’ game-winning field goal attempt from 30 yards out went wide right as time expired.

ABOUT THE MIDWESTERN SERIES
• The Lions lead the all-time series, 13-11.
• A&M-Commerce has an 8-4 lead in games played in Commerce.
• Of the last seven meetings, six have been decided by one score.
• The last two games have been started in Wichita Falls.
• Three straight games were played in Commerce in 2015 and 2016.
• Since the resumption of the series in 2011 after a brief hiatus, MSU is 7-2.
• The Lions’ win in the 2018 Sunday Special snapped a three-game Mustang win streak.
• Including this game, the last nine matchups have featured at least one nationally-ranked team.
• This is the first time since the 2014 game that MSU is unranked in this game.
• The series dates back to 1947, when East Texas State defeated Hardin College, 20-7, in Commerce.
• The Lions won the first 10 games in the series.

BAILIFF BEGINS ON RIGHT FOOT
• Lion Football head coach David Bailiff was hired in December 2018 as the 20th head football coach at A&M-Commerce.
• Since East Texas joined the Lone Star Conference as charter members in 1931, Bailiff is the 13th head coach of the Lions.
• He has won all four of his “firsts” games at A&M-Commerce

LIONS CONTINUE RANKINGS RUN
• The Lions moved up one spot to No. 21 nationally in the 2019 American Football Coaches Association Division II Coaches’ Poll released Monday.
• A&M-Commerce has been ranked in 59 consecutive AFCA polls, dating back to the 2015 preseason poll.
• This is A&M-Commerce’s 65th all-time appearance in the AFCA poll since its inception in 2000.
• In the polls recognized by Division II as the top rating system, the Lions have been recognized as a nationally ranked team 114 times since joining Division II in 1981.

NO SMALLS FEAT
• Quarterback Miklo Smalls has established himself as one of the most accurate efficient passers in the LSC and Division II.
• His top performance came on Sept. 21, when he won Lone Star Conference Offensive Player of the Week honors, completing 13-of-15 passes for 243 yards with four touchdowns and one interception.
• His passing efficiency rating of 297.413 in that game is the second-best single-game performance by a quarterback in Division II this season.
•His 86.7 completion percentage in the game is six-best in the nation this year of passers with 15 or more attempts in a game.
•His 72.8 percent (75-of-103) completion percentage for the season ranks fifth in Division II.

TO THE CRIB!
• Junior return specialist Dominique Ramsey‘s 55-yard punt return for a touchdown in the ENMU game earned him Lone Star Conference Special Teams Player of the Week honors.
• He became the first player in the Lone Star Conference to return a punt for a touchdown this season.
• He averaged 35 yards per punt return in the ENMU game and ranks second in the LSC in both punt and kickoff return average.
• He now has five career returns for touchdowns:

On this date in Texas A&M-Commerce/East Texas State Football (4-6) :
• 1922 – East Texas plays in its first-ever neutral site game, falling to Grubbs Vocational College (now UT Arlington), 20-2, at the Dallas Fairgrounds. The game was played in the original Fair Park Stadium, which was built the previous year. It was razed in 1930 for construction of the new Fair Park Stadium, which turned into the Cotton Bowl Stadium.
• 1957 – The Lions are tripped up at home by Lamar Tech, 7-6, in their only loss of the season. The Lions would  win the Tangerine Bowl on New Year’s Day.
• 1963 – East Texas heads south and loses to the Texas A&I Javelinas, 17-0.
• 1968 – After a loss the previous week, the Lions host McMurry and pick up a 20-0 shutout victory.
• 1974 – The Lions host Texas A&I and lose a narrow 27-20 decision.
• 1985 – East Texas sees a two-game winning streak snapped with a 41-13 loss to Central State at home.
• 1991 – The Lions pull out an important close win in Kingsville with a 24-22 triumph over Texas A&I.
• 1996 – A&M-Kingsville takes the Chennault Cup in the first game with both teams competing under A&M names, with the Hogs winning 35-28.
• 2002 – A&M-Commerce loses the Chennault Cup after a win the previous season, with the Javelinas taking the decision, 37-15.
• 2013 – The Lions earn their second Chennault Cup in the current eight-game streak with a 41-28 win at A&M-Kingsville.

Deaths of Texans not Wearing Seat Belts Spike 16% in 2020