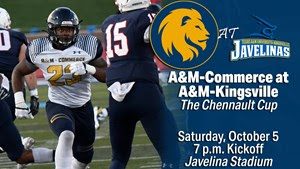 WHO: Texas A&M University-Commerce at Texas A&M University-Kingsville
WHERE: Kingsville | Javelina Stadium
WHEN: 7 p.m. on Saturday, October 5
RECORDS: A&M-Commerce is 3-1 overall and 1-0 in the Lone Star Conference after losing at Colorado State-Pueblo last week, 24-17. A&M-Kingsville is 1-3 overall and 0-2 in the LSC after a 48-34 loss at Eastern New Mexico.
RANKINGS: A&M-Commerce is ranked No. 21 in the AFCA Coaches’ Poll and No. 20 in the D2Football.com Media Poll. A&M-Kingsville is unranked.

BAILIFF BEGINS ON RIGHT FOOT
Lion Football head coach David Bailiff was hired in December 2018 as the 20th head football coach at A&M-Commerce.
Since East Texas joined the Lone Star Conference as charter members in 1931, Bailiff is the 13th head coach of the Lions.
He has won all three of his “firsts” games at A&M-Commerce, defeating Nuevo Leon for the win in his first game, beating Western Oregon for the win in his first road game, and taking down Eastern New Mexico in his first LSC game.
This is another “first” game, as the Kingsville game is his first LSC road game.
Bailiff was the head coach at Texas State University from 2004-06 and at Rice University from 2007-17. The Lions’ 2019 season will be Bailiff’s 15th season as a collegiate head coach.
As a collegiate head coach, Bailiff has led a team to the NCAA Division I National Semifinals and has made five total postseason appearances with a 5-2 postseason record.
The 2005 Texas State Bobcats were Division I National Semifinalists, and Bailiff led the Rice Owls to four bowls with a 3-1 record in those games.
Bailiff has led teams to 10-win seasons in three seasons (one at Texas State, two at Rice). Under his watch, the Owls had the most wins in school history over a two (18), three (25), and four (30) year periods. Rice’s 18-9 mark from 2013-14 was the second-best of any FBS program in Texas.

ALL-TIME AGAINST THE HOGS
The Lions and Javelinas are meeting for the 66th time in a series that dates back to 1930.
The Javelinas have a 35-29-1 lead in the series.
A Lion win would be the eighth straight in the series for A&M-Commerce.
The Lions’ current seven-game winning streak is their longest in the series with the Hogs.
A&M-Commerce’s current streaj is tied for the longest streak by either school in the long-standing rivalry. A&M-Kingsville won seven straight matchups from 1992-99.
Of the Lions’ current seven-game streak, the 2013, 2015, and 2017 wins came in Kingsville and the 2012, 2016, and 2018 wins came in Commerce. The 2014 victory was part of the Lone Star Conference Football Festival at AT&T Stadium in Arlington.

THE CHENNAULT CUP
The two teams play for the Chennault Cup, which was implemented in 1991 and recognizes the late Lt. General Claire Chennault.
Chennault was a Commerce native who was a member of the famous “Flying Tigers” fighter squadron during the 1930s and was the commander of the 14th Air Force during World War II. He spent time training and teaching at the Naval Air Station Kingsville during his distinguished military career.
The original series was between West Alabama and A&M-Commerce, but shifted to Kingsville in 1992.
The Javelinas hold a 16-10 advantage in Chennault Cup games despite the Lions holding it for the past seven seasons.

WE’RE GOING STREAKING!
By qualifying for their fourth straight NCAA Division II Playoff berth in 2018, the Lions have the third-longest active playoff streak in the nation.
Only Northwest Missouri State (15 straight) and Ferris State (five straight) have longer active playoff streaks than A&M-Commerce.
In Lone Star Conference history, only A&M-Kingsville (1992-98, 7 straight) has a streak of more than four appearances.
The Lions have also advanced to the regional semifinal round for three consecutive seasons. National runner-up Ferris State has reached the regional semifinal four times in a row.

LIONS CONTINUE RANKINGS RUN
The Lions fell to No. 21 nationally in the 2019 American Football Coaches Association Division II Coaches’ Poll released Monday.
A&M-Commerce has been ranked in 58 consecutive AFCA polls, dating back to the 2015 preseason poll.
This is A&M-Commerce’s 64th all-time appearance in the AFCA poll since its inception in 2000.
In the polls recognized by Division II as the top rating system, the Lions have been recognized as a nationally ranked team 113 times since joining Division II in 1981.

OPENING SIX PACK
The Lions have won their first Lone Star Conference game of the season in each of the last six years.

NO SMALLS FEAT
Quarterback Miklo Smalls won Lone Star Conference Offensive Player of the Week honors for his performance in the win over ENMU on Sept. 21.
Smalls completed 13-of-15 passes for 243 yards with four touchdowns and one interception.
His passing efficiency rating of 297.413 is the best single-game performance by a quarterback in Division II this season. One FBS, one FCS, and three Division III quarterbacks have had 300-plus ratings this year.

TO THE CRIB!
Junior return specialist Dominique Ramsey‘s 55-yard punt return for a touchdown in the ENMU game earned him Lone Star Conference Special Teams Player of the Week honors.
He became the first player in the Lone Star Conference to return a punt for a touchdown this season.
He averaged 35 yards per punt return in the ENMU game and ranks second in the LSC in both punt and kickoff return average.
He now has five career returns for touchdowns:

A&M-Commerce and A&M-Kingsville are the only two LSC teams with punt return for a touchdown through four weeks this season.

REBOUNDING FROM A SETBACK
The Lions have been exceptional in responding to the rare loss in the last few seasons.
The last time A&M-Commerce lost consecutive games was 2016, with a loss in the LSC playoff championship game followed by a loss at Ferris State in the first round of the NCAA playoffs.
The last time A&M-Commerce lost consecutive regular season games was in 2013, with losses to No. 4 West Texas A&M and No. 23 Midwestern State in weeks 3 and 4.
In the last seven games after a loss, the Lions have picked up a win, dating back to the 2016 season opener after ending the 2015 season at Ferris State.

COOPER CATCHING ON
Junior receiver Chance Cooper had two receiving touchdowns in the win over Eastern New Mexico
His 75.0 yards per game ranks sixth in the LSC and his 18.8 yards per reception ranks third in the league.
His 73-yard reception in the ENMU game ranks fourth in the LSC this season.

SHILLOW GETS STOPS
Redshirt junior safety Alex Shillow has led the team in tackles in the last two games and moved into the top 10 in the LSC in tackles per game at 7.3 stops per contest.
The NCAA Division II National SAAC Chair also recovered a fumble on kickoff coverage in the first half of the ENMU game to set up a Lion score.
His 138 career tackles ranks second on the team behind Mark Westbrook.
Westbrook has 46 career stops from various linebacker and safety positions over the years.
Westbrook needs one solo tackle to reach the 100 career solo tackle mark.
Westbrook also recovered a fumbled punt in the endzone at CSU-Pueblo

JAKE IS THIS YEAR’S MR. AUTOMATIC
Junior kicker Jake Viquez extended his career-long in field goals with a 44-yarder at CSU-Pueblo. He also made both of his PAT attempts.
For the season, he is 4-of-4 on field goal attempts and a perfect 12-of-12 on PAT attempts.
The Lions are the only team in the LSC without a missed field goal or missed PAT.
His 8.0 kicking points per game is tied for second in the conference.
Including the career of Lion Legend Kristov Martinez, the Lions have now made 115 consecutive PATs, dating back to the Eastern New Mexico game in 2017.

ALL-TIME IN OT
The Lions have had an overtime game in each of the last two seasons.
A&M-Commerce is 5-3 all-time in overtime games (2-0 in double OT, 1-0 in triple OT)

On this date in Texas A&M-Commerce/East Texas State Football (6-3) :
1928 – The Lions pick up their first win of the season, snapping a 22-game winless streak (0-20-2), with a 25-0 shutout victory over Stephen F. Austin.
1951 – ETSU makes the short trip west to Denton and drops a 48-7 decision to North Texas’ Eagles. The loss would be the last for head coach Catfish Smith, who ends his ETSU career on a 29-0-1 unbeaten streak through the 1954 Tangerine Bowl. This is also the last game played between North Texas and East Texas on the gridiron.
1957 – J.V. Sikes’ Lions head to Brownwood and open LSC play with a 31-12 win at Howard Payne.
1968 – The Lions fall in a road contest to UT Arlington, 41-30.
1974 – East Texas avenges a loss from the previous season with a 17-7 victory over Howard Payne at home.
1985 – The Lions trek to Huntsville and hand Sam Houston State a 40-21 loss in the Bearkats’ final Division II season. SHSU would tie for the championship of the Gulf Star Conference – the predecessor to today’s Southland.
1991 – East Texas rolls to a 51-21 win at home over Central Oklahoma in the LSC opener.
1996 – The Lions fall in Edmond to the Central Oklahoma Bronchos, 38-21.
2002 – A&M-Commerce puts up its first win of the season in a 23-3 victory over Southeastern Oklahoma St.