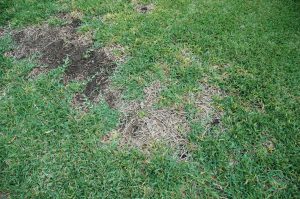 Take-all root rot is a fungal disease that causes weak, brown, dead patches in turfgrass. In Texas, the disease severely affects St. Augustinegrass  and bermudagrass, in which the disease is known as bermudagrass decline. Take-all root rot is caused by a fungus, Gaeumannomyces graminis var. graminis, that lives in the soil. The fungus lives in many parts of Texas and is commonly found in both diseased-looking and apparently healthy-looking turfgrass. It lives in thatch, which is a layer of plant roots, stolons (shoots that grow horizontally along the ground surface), and decaying plant matter. The fungus can produce spores but spreads mainly through the roots and stolons. The disease is not usually transported by mowers or foot traffic; it is more likely to be spread when infected grass, thatch, or soil is moved elsewhere. The symptoms of take-all root rot often appear in spring or early summer when the turfgrass emerges from winter dormancy. However, they may appear anytime during the growing season when the grass is stressed by heat, drought, shade, alkaline soil, or high-sodium water.The most obvious initial symptom is yellowish foliage that eventually turns brown and wilts. The turf thins out, leaving brown, irregular patches from 1 foot to more than 20 feet in diameter. As a field diagnosis, look at the roots of infected grass, which are usually short, blackened, and rotten, making it easy to lift the stolons from the soil. The nodes, or stem joints, may be discolored. On St. Augustinegrass, take-all root rot may be easily mistaken for large patch, which is caused by Rhizoctonia solani (Fig. 4), or chinch bug injury (Fig. 5). If you suspect that your grass has take-all root rot, first eliminate the possibility of these other two common problems. The treatments for them differ greatly from those for take-all root rot. Chinch bugs are about the size of a sesame seed and move fast, which makes it difficult for the untrained eye to recognize them. To confirm the presence of chinch bugs on your turfgrass:1. Mix 1 to 2 tablespoons of liquid dishwashing detergent in 1 gallon of water.2. Use a watering can to pour the mixture evenly over a 1-square-yard area of the affected turf. 3. Look closely for chinch bugs. Within minutes, they will begin scurrying about. The adult bugs are black and about 3/16 inch long, with distinctive shiny, white wings; the immature nymphs are smaller and reddish, with a whitish band across the back . If many chinch bugs appear, they are probably the main cause of the turf problem. In some cases, the turfgrass may be afflicted by both chinch bugs and take-all root rot. If so, you must act against both culprits, and you may need to apply both an insecticide and a fungicide. Large patch: An easy diagnosis method is to pull a few plant leaves out. Unlike those infected with take-all root rot, grass blades with large patch can be slipped easily from the stolon because the fungus has rotted the stems. Infected leaves often have a slimy, dark brown lesion at the base of the leaf. For more information on this or any other agricultural topic please contact the Hopkins County Extension Office at 903 885-3443.