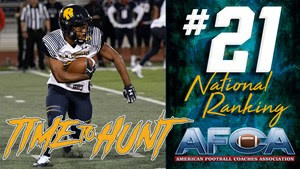 The Texas A&M University-Commerce football team is ranked No. 21 in this week’s American Football Coaches Association Division II Coaches’ poll, as announced by the AFCA on Monday.

The Lions came up just short in a 24-17 loss against No. 18 Colorado State-Pueblo last week, getting held out of the end zone on the final play of regulation.

Five A&M-Commerce opponents in 2019 are ranked in the top 25 or receiving votes. Tarleton held at No. 4 in the nation, while CSU-Pueblo jumped from No. 20 to No. 18 this week. Angelo State entered the top 25 this week, appearing at No. 23. Midwestern State and West Texas A&M are also receiving votes.

A&M-Commerce has been ranked in 57 consecutive AFCA polls, dating back to the 2015 preseason poll. This is A&M-Commerce’s 63rd all-time appearance in the AFCA poll since its inception in 2000.

In the polls recognized by Division II as the top rating system, the Lions have been recognized as a nationally ranked team 112 times since joining Division II in 1981.

The No. 21 Lions return to Lone Star Conference play this week as they travel to face Texas A&M-Kingsville for ownership of the Chennault Cup. The game will be played at 7 p.m. at Javelina Stadium in Kingsville.

Experience the Wonders of Fall at Cooper Lake State Park!