Home Local News No. 12 Texas A&M-Commerce Lions Use First Half Surge to Roll to 45-27 Win Over Eastern N.M.
Local News 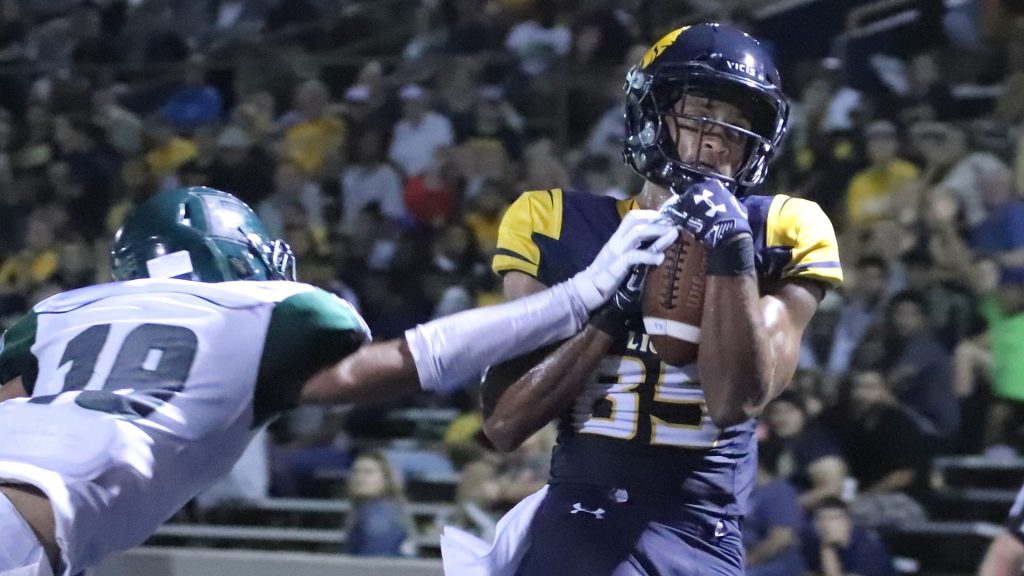 The No. 12 Texas A&M University-Commerce football team scored 24 consecutive points in the first half on the way to a commanding 45-27 victory over Eastern New Mexico University in the Lone Star Conference opener for both teams on Saturday at Ernest Hawkins Field at Memorial Stadium.

A&M-Commerce will now play two straight games on the road, starting with a non-conference tilt at Colorado State-Pueblo on Saturday, September 28, at 6 p.m. MDT (7 p.m. CDT) in Pueblo, Colo.

INSIDE THE BOX SCORE
– Eastern New Mexico’s triple option offense held the ball for 39:42 of the game clock and ran 82 plays to the Lions’ 41, limiting the hosts’ opportunities to succeed on offense.
– Quarterback Miklo Smalls (Plano – East) was efficient for the Lions yet again, completing 12-of-14 passes for 235 yards and four touchdowns against only one interception. He also had eight carries for 25 yards.
– Chance Cooper (Leander – Rouse) continued his string of big plays, snagging three receptions for 112 yards and touchdowns of 73 and 18 yards. Jeremiah Bridges (Powder Springs, Ga.) had six catches for 77 yards and touchdowns of 9 and 36 yards.
– Antonio Lealiiee (Copperas Cove) was the top rusher for the Lions with five carries for 58 yards, while Carandal Hale (Greenville) had a 1-yard touchdown rush.
– Jake Viquez (Rockwall) had a 43-yard field goal and was 6-of-6 on PAT attempts. His strong work in the kickoff game also benefitted the Lions.
– All-American return man Dominique Ramsey (Converse – Judson) had a 55-yard punt return for a touchdown in the first quarter.
– Alex Shillow (Pflugerville) had 11 tackles (seven solos) and a key fumble recovery on a kickoff which set the Lions up for a score. Peyton Searcy (Killeen) also set up a Lion touchdown with a fumble recovery.
– Felipe Chambers (Fair Oaks, Calif.) had nine tackles and a tackle for loss. Peter Kazibwe (Colchester, Conn.) had seven stops.

HOW IT HAPPENED
Eastern New Mexico received the opening kickoff and a 13-play drive which took almost eight minutes off the clock and bogged down inside the Lion 10. A Kader Kohou (Euless – Trinity) tackle for loss stopped the drive and forced the Greyhounds to settle for a 26-yard Tyler Vargas field goal. ENMU led 3-0 with 7:10 left in the opening frame.

The Lions responded with strong drive down to the ENMU 23 yardline before a Greyhound intercepted a Smalls pass at the 2-yardline. A&M-Commerce immediately flipped the turnover though, as Searcy jumped on a mishandled Greyhound handoff on the next play. Two plays later, Hale punched it in from a yard out, giving the Lions a 7-0 lead with 3:59 left in the quarter.

Two tackles for loss on the next drive by the Lions snuffed out the ENMU drive and forced the punt. Ramsey fielded the ball at his own 45-yardline, then weaved his way downfield for the touchdown, making it a 14-3 game with 1:59 to play in the first quarter.

The Lions’ next points came on their second drive of the second quarter, as an eight-play, 31-yard drive ended in Viquez’ 43-yard field goal to make it 17-3 with 4:20 left in the half.

Viquez’ ensuing kickoff was botched by the ENMU return man and recovered by Shillow at the Greyhound 22. Three plays later, Smalls found Bridges in the endzone for a nine-yard touchdown pass. The score stood at 24-3 in the hosts’ favor with 3:06 left in the half.

The Greyhounds bled the first half clock out and Vargas made a 42-yard field goal as time expired to make it a 24-6 game at the intermission.

A&M-Commerce extended the lead on its second drive of the third quarter, as Smalls found a streaking Cooper in stride for a 73-yard touchdown pass with 11:29 left in the period to make it 31-6.

The next Greyhounds tally came in bizarre fashion. After the Lions stoned the triple option attack with a Ronathon Elmore (Belleville, Mich.) sack, the 29-yard field goal attempt was blocked by Darent White (Spring – Westfield). However, ENMU’s Vicen’te Walker picked the ball up behind the line of scrimmage and ran for a touchdown. The two-point conversion cut the lead to 31-14 with 2:26 left in the quarter after the Greyhounds used 9:01 of the clock.

Smalls orchestrated solid drives on the Lions’ next two possessions. A six-play, 65-yard drive ended on a 36-yard touchdown pass to Bridges, and the next Lion surge ended on an 18-yard scoring pass to Cooper. That score was set up by a 36-yard rush by Lealiiee.

ENMU quarterback Wyatt Strand scored a pair of rushing touchdowns in the fourth quarter, but long periods of Greyhound possession kept the guests from threatening in the final quarter.