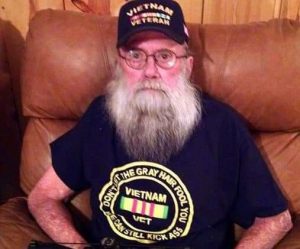 Memorial service scheduled for 2:00 PM, Tuesday, September 24, 2019 at Wilson-Orwosky Funeral Home in Emory.  No visitation has been scheduled.

Eric was born on July 15, 1951, in Ft. Worth, to Joe Russell and Dorothy Jean Bodine Reynolds.  He proudly served our country in the U.S. Army, during the Vietnam War.  It was his honor to be a part of standing for his country.  Eric married Peggy Diana Canada in Carlsbad, New Mexico on July 12, 1981.  He was a Master Electrician in Construction and worked on many dangerous and precarious jobs.  Eric was a Christian and of the Baptist faith.  He belonged to IBEW (International Brotherhood of Electrical Workers), and to DAV (Disabled American Veterans.)

Please sign the guestbook for the family at www.wilsonorwoskyfuneralhome.com

Wilson-Orwosky Funeral Home has been entrusted with the care and cremation.