The Hopkins County Chamber of Commerce is pleased to announce that Brookshire Grocery Company has partnered with the Chamber of Commerce to become “Your Local Stew Headquarters.” Brookshire’s has proudly served the Sulphur Springs community since 1958 and provides a full-service supermarket focused on excellent customer service and high-quality fresh meats and produce. The partnership with Brookshire’s for the 50thAnniversary Stew Contest will bring a new level of service to our cooks and individuals preparing for the World-Famous Hopkins County Stew Contest.

This year, Brookshire’s is introducing an “Early Order Option” for contestants. Stew cooks can complete a pre-order form for groceries that Brookshire’s will fill and deliver to their car at a designated pickup time. Cooks may also pre-order their custom proteins from Brookshire’s market and deli, which can be included in their order for pickup.

The 50thAnniversary of the Hopkins County World Champion Stew Contest will be held on Saturday, October 26, 2019, at Buford Park in Sulphur Springs, Texas. That Saturday will be traditional in the fact that Hopkins County Stew will be cooked in cast iron cauldrons over an open flame in the park. Stew service will begin at 10:45 a.m. for the general public, and winners will be announced as soon as judging has concluded. Tickets for all-you-can-eat stew will be

$6.00 each and will be for sale at the Chamber of Commerce and all local banks.

Friday night, October 25, 2019, will also contain an array of celebratory activities. Down to Earth Services will host “A Down to Earth Friday Night,” which includes a concert in the park featuring Dubb and the Luv Machines, a hometown band with a hometown feel. During the concert there will be a “Down to Earth Appetizer Contest” between stew sites. The winner will be announced during the home football game at Gerald Prim Stadium that very evening. Once the Wildcat football game concludes, Dubb and the Luv Machines will present an encore concert in Buford Park to round out the evening.

Hopkins County has been home to the World Champion Stew Contest for 50 years now, and we hope you will join us for this very special anniversary on October 26, 2019, at Burford Park in Sulphur Springs, Texas. 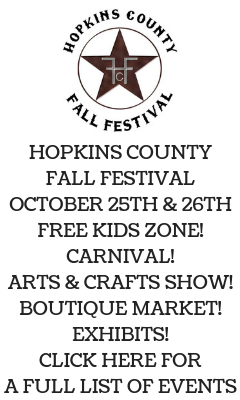