YOUR TEXAS AGRICULTURE MINUTE: Is USMCA a tune America can dance to? Presented by Texas Farm Bureau’s Mike Miesse 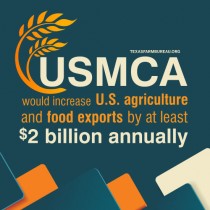 When I first heard that the NAFTA upgrade would be called USMCA, I thought of the nonsensical song by the Village People, YMCA. NAFTA was such a cool acronym. It kind of rolled of the tongue. It was even better as a trade agreement. Especially for agriculture. And for Texas. Trade between the U.S., Mexico and Canada exploded under NAFTA.

USMCA is even better, with its own set of letters. NAFTA is, after all, 25 years old. USMCA does a better job of protecting American workers. It’s updated for the digital age, addressing intellectual property. USMCA tears down trade barriers for farmers that NAFTA failed to overcome.

Trade has taken a beating lately, headlined by the trade war with China. USMCA would shore up our trade relationships closer to home while we sort things out elsewhere.