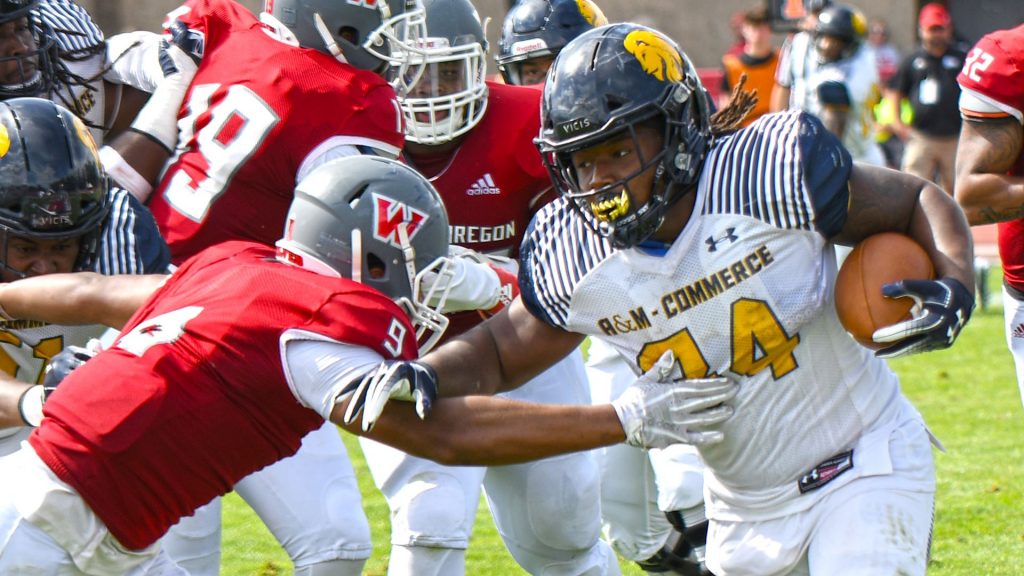 The No. 12 Texas A&M University-Commerce football team scored the game’s final two touchdowns and made a stand late to earn a 34-27 win over Western Oregon University at McArthur Field on Saturday afternoon.

The Lions move to 2-0 on the season with the victory, earning head coach David Bailiff his first road win in the blue and gold. The WOU Wolves fall to 0-2.

A&M-Commerce hosts CommUniverCity Day and Family Weekend on Saturday, September 21, when the Lions host Eastern New Mexico for a 6 p.m. kickoff in the Lone Star Conference opener for both teams. Tickets for the game are available at the box office, online at WeAreLionsTix.com, or by calling (903) 468-8756.

INSIDE THE BOX SCORE
– E.J. Thompson (Cy-Ranch) scored rushing touchdowns of 9, 1, and 5 yards, including the game-winner with 5:59 to play. He had 17 carries for 81 yards.
– Miklo Smalls (Plano – East) completed 23-of-31 passes for 235 yards and a touchdown. He found eight different receivers in the contest.
– Chance Cooper (Leander – Rouse) was the top target with five catches for 42 yards, including a highlight reel 22-yard touchdown grab in the third quarter.
– Ryan Stokes (St. Louis, Mo.) was the top yardage receiver for the Lions with four catches for 60 yards. His 52-yard grab in traffic in the fourth quarter set up the game-tying score.
– Jalon Edwards-Cooper (Spring – Dekaney) and Neema Behbahani (Plano) tied for the team lead with five tackles apiece. Chris Williams (Atlanta, Ga.) recorded a sack and Kader Kohou (Euless – Trinity) had an interception with a 40-yard return to set up the game-winning score.
– Jake Viquez (Rockwall) made field goals of 30 and 20 yards and made four PATs.

HOW IT HAPPENED
The Lions opened the scoring on their first offensive possession of the contest with a 12-play drive consuming 44 yards and nearly six minutes of clock. The Lions had a fourth down conversion and a third down conversion before Viquez drilled a 30-yard field goal to put A&M-Commerce ahead 3-0 with 7:21 left in the first quarter.

A&M-Commerce’s second drive results in the first touchdown of the day. After a pair of conversions in WOU territory, Thompson’s 9-yard scoring trot on the second play of the second quarter made it a 10-0 lead. The Lion drive took over six-and-a-half minutes and 12 plays.

Western Oregon did not get a first down until its fifth drive of the contest, but that first down came on a big completion to put the Wolves on the doorstep of scoring. Ty Currie’s 3-yard touchdown run cut the lead to 10-6 after the PAT failed with 9:07 left in the first half.

The Lions went three-and-out and the ensuing 10-play WOU drive gave the hosts the lead at 13-10 after Omari Land punched in a 1-yard touchdown run. That score would stand at halftime.

A&M-Commerce tied the game on the first drive of the second half. Thompson opened the half with a 25-yard carry and the Lions moved their way deep into WOU territory before settling for the Viquez 20-yard field goal to tie the game at 13-all with 7:48 left in the third quarter.

The Lions took the lead back on on their next drive thanks to strong passing from Smalls. The 10-play, 79-yard drive was capped by Cooper’s 23-yard catch above a defender’s head in the end zone. A&M-Commerce led 20-13 with 2:11 left in the third quarter.

Western Oregon tied the game back up at 20-all on a 1-yard touchdown carry early in the fourth quarter, then took the 27-20 lead with 9:44 to play on a breakaway 74-yard touchdown.

On the Lions’ next play, Smalls went over the top with a long ball towards Stokes, whose reception in traffic was good for 52 yards. Thompson’s second touchdown of the day from 1-yard out tied the game at 27-27 with 8:22 to play.

Two plays later, Kohou was the beneficiary of a wayward pass by Currie, and returned the interception into the Wolves’ redzone. Five plays later, Thompson found paydirt for the third time in the game, punching it in from five yards out to give the Lions the 34-27 lead with just under six minutes to go.

The Wolves drove down the field in an attempt to force overtime before the Lion defense bowed up to keep the hosts at bay. Western Oregon converted three third downs in the final minutes and got down to the Lion 14. On third-and-10, Elijah Earls (San Antonio – Stevens) and Pierre Leonard (Tyler – John Tyler) teamed up for a tackle for loss, and the fourth down pass fell incomplete to allow the Lions to hold on for the win.