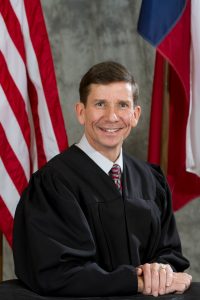 8th Judicial District Judge Eddie Northcutt has announced his intention to seek re-election to the post. Northcutt was initially elected in 2012 and was re-elected without opposition to a second term in 2016. A Republican, Northcutt will once again seek the nomination of his party in the March, 2020 primary.

The 8th Judicial District is comprised of Hopkins, Franklin, Rains, and Delta counties.

“It has been my distinct privilege and honor to serve as District Judge. When initially running for this job, I stated that the experiences and skill set I possess would uniquely qualify me to serve this area as a district judge, and I have found that to be very true.”

“My previous experiences as a mental health professional, minister, school teacher, and attorney have greatly benefitted me – and ultimately the citizens of this district – as I have been on the bench.”

Northcutt has presided over several thousand cases in the district since taking the bench in January, 2013, including scores of jury trials and trials to the court (without a jury).

Northcutt, who also serves as the Local Administrative Judge for the four counties he serves,as well as serving by appointmentof the President of the State Bar of Texas to serve on the state-wide Jury Service Committee.

“In talking with other judges from around the state, I am convinced that we are one of the busiest courts in the state. As those involved with our court can attest, I am committed to moving cases through the judicial process quickly, consistent with justice.”

“The key to our success is having great people involved in the judicial process, and we have that. Our court coordinator, court reporter, and the district clerks that I deal with every day, as well as the high quality of attorneys that practice in our district are outstanding and aid in the efficiency of our court.”

“I think the highest honor I have encountered is the confidence that attorneys and litigants have in me when a decision is made to waive a jury and try the case to the court. I believe they know that I will listen carefully and apply the law to the facts in rendering a fair and impartial judgment. I have been pleasantly surprised at the high number of cases that have fallen into this category. It aids in judicial efficiency and results in lower costs to tax payers.”

“I look forward to the opportunity to continue serving the citizens of the 8th Judicial District.”