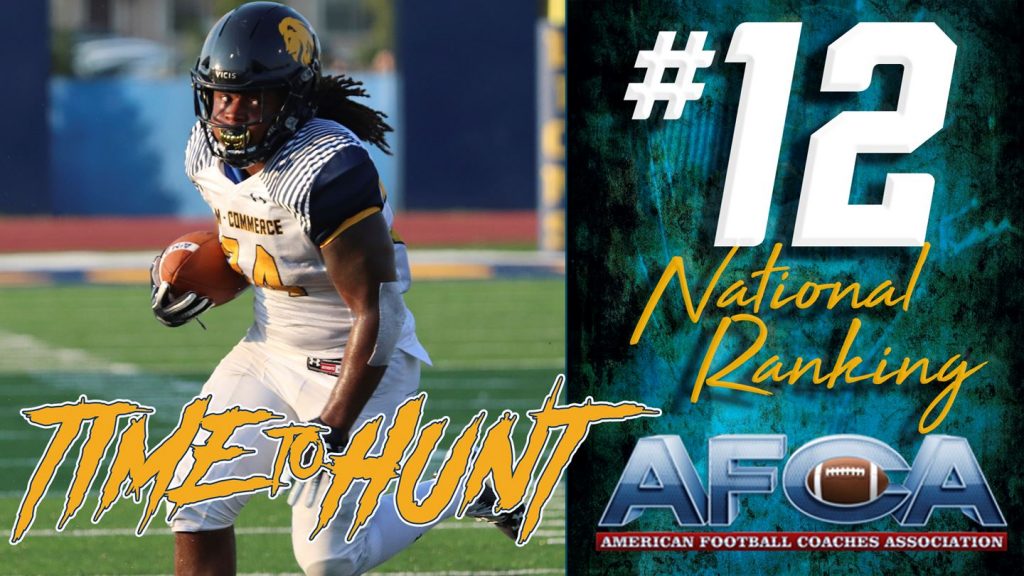 The Texas A&M University-Commerce football team moved up one spot to earn the No. 12 national ranking in the first regular season release of the American Football Coaches Association Division II Coaches’ Poll, as announced by the AFCA on Monday.

The Lions rolled to an 83-0 win over Selección Nuevo León in the season opener, giving head coach David Bailiff a victory in his first game as the Lions’ head coach. The Lions were dominant in every phase of the game in their first-ever international contest.

Six A&M-Commerce opponents in 2019 are ranked in the top 25 or receiving votes. Tarleton moved up to No. 5, Colorado State-Pueblo held steady at No. 9, and Midwestern State jumped to 16th. West Texas A&M, Angelo State, and Eastern New Mexico are receiving votes. The Lions are the fourth-highest ranked team in Super Region Four.

A&M-Commerce has been ranked in 54 consecutive AFCA polls, dating back to the 2015 preseason poll. This is A&M-Commerce’s 60th all-time appearance in the AFCA poll since its inception in 2000.

In the polls recognized by Division II as the top rating system, the Lions have been recognized as a nationally ranked team 109 times since joining Division II in 1981.

The Lions face Division II opposition for the first time in 2019 this weekend, as they hit the road for a matchup with Western Oregon. Kickoff in Monmouth, Ore., is set for 3:05 p.m. CDT, with radio coverage on the Lion Sports Network.