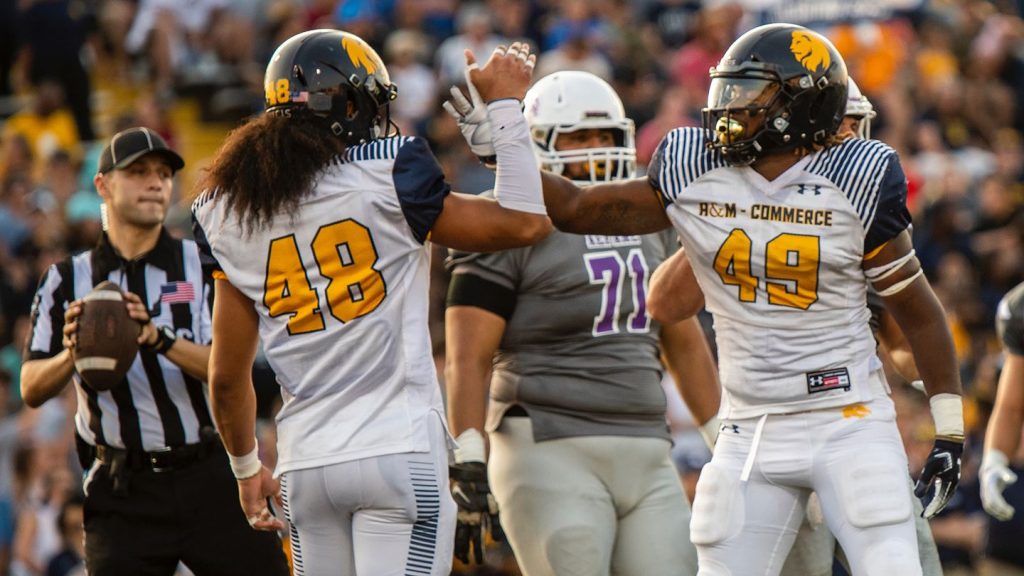 The No. 13 Texas A&M University-Commerce football team gave head coach David Bailiff a victory in his first game as the Lions’ head coach, running away with an 83-0 win over Selección Nuevo León.

INSIDE THE BOX SCORE
– The Lions had 411 yards of offense and averaged 11.4 yards per play on 36 offensive plays.
– Quarterback Miklo Smalls (Plano – East) completed all four of his passes for 103 yards and a pair of touchdowns. Kelan Smith (Dallas – First Baptist) and Tyler Guice (Atlanta, Ga.) were on the receiving end of Smalls’ touchdown passes.
– Spencer Long (Mont Belvieu – Barbers Hill) had seven carries for 73 yards and a score and Antonio Lealiiee (Copperas Cove) carried the ball eight times for 65 yards and two touchdowns. The Lions had six rushing touchdowns, as Jaquorious Smith (Kilgore), J.T. Smith (Klein – Oak), and E.J. Thompson (Cy-Ranch) each had rushing scores.
– JaQuorious Smith also opened the second half with a 70-yard kickoff return for a score. Kader Kohou (Euless – Trinity) had a 66-yard kickoff return for a touchdown.
– Devin Beamon (Forney – North Forney) made a tackle for a safety as one of 22 Lion tackles for losses on 41 Nuevo León plays.
– Tali Amosa (Melbourne, Australia) had five tackles, all for loss, with a forced fumble, and a fumble recovery for the Lions’ final touchdown.
– Amosa, Kohou, and Christian Wise (Houston – Bellaire) had fumble recoveries, and Dominique Ramsey (Converse – Judson) and L.A. Dawson (Austin – LBJ) had interceptions.
– The Lions rotated kickers with Jake Viquez (Rockwall) making a 24-yard field goal and nine PATs, and Andrew Gomez (Richardson) made a 27-yard field goal.
– The Lion defense limited Nuevo León to minus-83 yards of offense, with losses of 80 yards in rushing. Nuevo León did not gain a first down in the game.