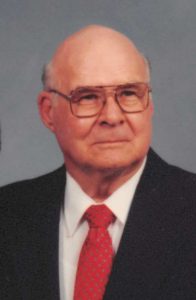 Graveside services for Truman B. Therwhanger, age 99, of Sulphur Springs, will be held at 10:00 a.m., Friday, September 6, 2019 at Rockdale Cemetery. There will be no formal visitation. Honorary pallbearers will be the Men’s Radio Bible Class. Truman passed away on Wednesday, September 4, 2019 at Rock Creek Health and Rehab.

He was born on January 27, 1920 in Weinert, TX, the son of George Browder and Eula Smith Therwhanger. He served in the United States Air Force during WWII. He worked in aviation as an aircraft mechanic all his life. He married Esma E. Therwhanger on October 22, 1947 in Lovington, NM. She preceded him in death on June 11, 2017. Truman was a member of the First Baptist Church and the Men’s Radio Bible Class. He is survived by sons, Charles Therwhanger of Lubbock, TX, Dwight Therwhanger of Sulphur Springs, Phillip Therwhanger and wife Sherry of Sulphur Springs, sister in law, Ann Therwhanger of Munday, TX, five grandchildren, and numerous great-grandchildren. In addition to his wife, Truman is preceded in death by his parents, grandson, Marty Therwhanger, and daughter in law, Suzanne Therwhanger.

In lieu of flowers, memorials may be made to the First Baptist Church Mission Fund at 116 Oak Avenue, Sulphur Springs, TX 75482 or Gideons International at gideons.org. Arrangements are under the direction of West Oaks Funeral Home. www.westoaksfuneralhome.com