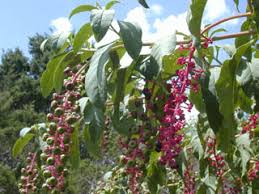 A common native plant setting berries this time of the year is the pokeweed. According to Penn State Extension, the common pokeweed (Phytolacca decandra) is an herbaceous perennial plant that can grow up to 9 feet tall. Mature plants resemble shrubs or young trees. However, the stems are not woody. Pokeweed reproduces from seeds. New leaves and roots, along with the berries, should not be eaten because they are toxic; having said that, years ago parts of the plant were used for medicinal use. The seedlings have alternate leaves that are reddish on the underside. The new shoots that emerge each year from the taproot resemble seedlings, but are thicker and clustered together before extending laterally. A pokeweed taproot can be over a foot long and 4 inches thick. Stems of mature plants are reddish. Pokeweed produces flowers from July into early fall. The small white flowers grow on reddish-stemmed racemes (clusters of lowers grown on short pedicels). The racemes are erect or droop.