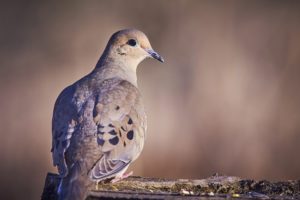 COLLEGE STATION – Dove season 2019 should provide a good opening weekend starting Sept. 1, but birds’ access to food and water will be a major factor in harvest success, according to a Texas A&M AgriLife Extension Service expert.

John Tomecek, Ph.D., AgriLife Extension wildlife specialist, Thrall, said hunters with access to areas where the birds have food sources, water and roosts should have an advantage over areas without.

Tomecek said drought conditions around the state will concentrate dove near resources as they migrate south. So if you want a successful hunt, go where dove can find food, water and shelter.

“Birds can spread out when there is plenty of water and food sources everywhere, but dry, hot weather over the last few months will limit where they will be found,” he said. “Having water sources like ponds or troughs to hunt over, especially in western parts of the state, should improve success.”

Agriculture crops such as sesame, sunflowers and sorghum are attractive food sources to dove. Providing food sources for dove can improve hunter success, but it can also be illegal if state laws are not followed, Tomecek said.

AgriLife Extension has publications regarding legal supplemental feeding for dove. “Normal Agricultural Operations and Dove Hunting: How to Legally Provide Food Sources and Improve Hunting Opportunities,” co-authored by Tomecek can be downloaded for free at the Texas A&M AgriLife Extension Bookstore.

Broadcasting seed or grains before and during dove season in an attempt to attract birds is illegal, he said. But broadcasting in the normal act of planting winter forages is legal when standard practices of seed drilling or broadcasting on prepared beds followed by light disking or dragging is incorporated.

When it comes to dove, landowners and managers are allowed to grow seed- and grain-bearing crops such as sesame or sorghum for the sole purpose of attracting dove and can manipulate stands in any way throughout the season to provide a food source for birds, Tomecek said.

However, he said, it is important to note that in areas where waterfowl harvest also occurs, grains may be planted and grown, but must be harvested for commercial production. “Restrictions on Waterfowl Hunting and Baiting,” can also be downloaded for free from the AgriLife Extension Bookstore.

“The best way to explain it is that if you put seed or grain on the ground this time of year from a sack, it’s likely illegal,” he said. “If you planted it and it is maturing during hunting season, you can manipulate it in any way to hunt over it throughout the season.”

Tomecek recommends grain-bearing crops intended for dove not be shredded all at once.

“Divide the coverage area by the number of weeks of the season and shred a percentage each week to keep food on the ground,” he said. “Mourning dove need the grain or seed to be on the ground since they cannot perch and eat at the same time.”

White-winged dove are capable of lighting and picking grains and seeds from food sources, he said. They are a larger dove species that has continued to expand its range farther north.

“Overall, we are hoping for a good dove season,” he said. “Bird numbers will depend on location, but it’s really about getting out to the field with friends and family or taking someone who has never been dove hunting before. It’s a tradition that makes lasting memories.”