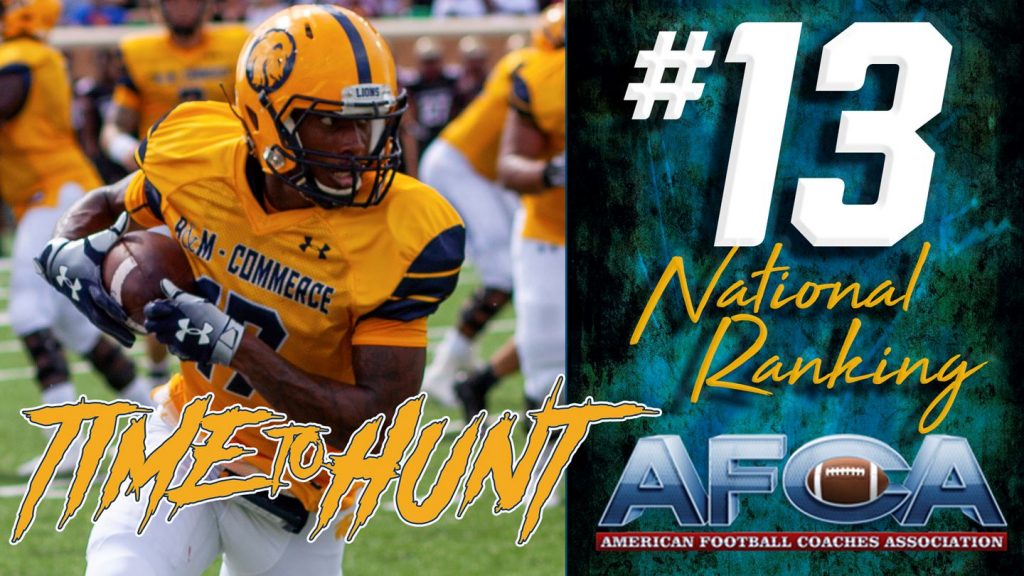 The Texas A&M University-Commerce football team is ranked No. 13 in the 2019 preseason American Football Coaches Association Division II Coaches’ Poll, as announced by the AFCA on Monday.

The Lions went 10-3 in 2018 for their third consecutive year with double-digit victories. A&M-Commerce advanced to the NCAA Division II playoffs for the fourth straight season and the regional semifinal round for the third straight year.

Four A&M-Commerce opponents in 2019 are ranked in the top 25 or receiving votes. Tarleton is No. 7 and Colorado State-Pueblo is No. 9. Midwestern State is ranked 20th and Angelo State is receiving votes. The Lions are the fourth-highest ranked team in Super Region Four.

A&M-Commerce has been ranked in 53 consecutive AFCA polls, dating back to the 2015 preseason poll. This is A&M-Commerce’s59th all-time appearance in the AFCA poll since its inception in 2000.

In the polls recognized by Division II as the top rating system, the Lions have been recognized as a nationally ranked team 108 times since joining Division II in 1981.

The 2019 season begins with Student Apprecation Day and International Day on Saturday, September 7, when the Lions host Selección Nuevo León for a 6 p.m. kickoff on Ernest Hawkins Field at Memorial Stadium. This is A&M-Commerce’s first-ever international football game and anticipation is mounting for the first action under new head coach David Bailiff. Season tickets are available at the Lion Sales and Service Box Office during regular business hours, by calling (903) 468-8756, or visitingWeAreLionsTix.com.