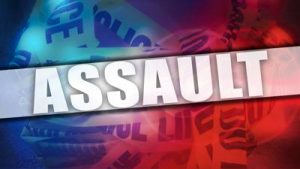 SSPD officers were dispatched to Quail Ridge Apartments in reference to an assault involving a subject with a knife. Officers were informed while in route that the subject had begun striking a vehicle with a 4-way tire iron and then left the apartment complex.

Officers arrived to the apartment complex and spoke the the victim of the assault who had multiple visible injuries. He alleged that Cody Pyron, 23, had come to the complex to speak to the victim’s girlfriend. The girlfriend was “talking to” both the victim and Pyron and had recently chosen to date the victim exclusively.

The victim stated that Pyron had spoken to his girlfriend shortly before punching the victim and putting him in a choke hold. He said Pyron continued striking him and they both fell to the ground. Pyron then allegedly wielded a pocket knife and swung it in the direction of the victim.

A Hopkins County Sheriff’s Office deputy was able to locate Pyron on Highway 11 East. He was taken into custody and charged with Aggravated Assault with a Deadly Weapon and misdemeanor Criminal Mischief. He is held at Hopkins County Jail and bond has not been set.