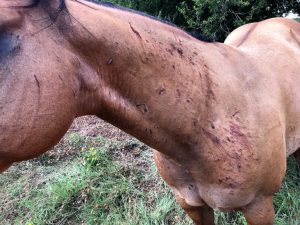 Horse flies can inflict serious wounds and introduce diseases to livestock. Livestock should be moved from infestation sites immediately to relieve and protect animals because chemical controls have shown minimal success abating horse flies, and many are not labeled for horses. (Texas A&M AgriLife Communications photo by Katie Hancock)

“It’s the worst year I’ve seen,” she said. “We don’t have much data on seasonal horse fly populations to compare, but we can speculate that all the rain we’ve had the last few years has created the right environmental conditions for higher horse fly numbers.”

Swiger said numbers should begin to wane because temperatures have risen to more inhospitable levels. But the pest can resurge with later summer rains or in the fall.

Despite the name, horse flies are not host-specific and will feed on opportune human and animal hosts, she said.

Horse flies only bite and feed once a day, she said.

Swiger said horse flies typically stay in shaded areas, such as along tree lines. They consume carbohydrates, such as nectars and honeydew, but females will range from cover to hunt hosts once a day.

Horse flies typically lay eggs over winter and in early spring, she said. Eggs are typically laid in shady, semi-aquatic to moist areas, including around the edges of ponds or water tanks.

“They can be in any number of locations, and that makes them hard to treat effectively,” she said. “The larvae are maggots, but they look like maggots on steroids. They are also very predacious and will feed on each other.”

There is no available data focused on the effectiveness of pours designed to curtail horse flies, Swiger said. But pyrethroid, especially synthetic pyrethroid-based pours, have been shown to provide temporary relief. And most synthetic pyrethroid products are not labeled for horses.

“There’s just not much labeled for horses, and even on cattle those chemicals don’t do much to deter horse flies,” she said. “Permethrins may work, but again, it’s going to be limited relief.”

The best defense for horses is to move them from the infested area, into a barn or to cover them with lightweight summer sheets designed to stop biting flies and mosquitoes, she said.

“They are visual hunters so many traps look like a black ball, which mimics the belly of an animal,” she said. “We trapped 350 horseflies and 200 deerflies over a 10-week period in two counties for a study. So, they do work. We just don’t have enough data yet to say how effective they are.”

Swiger noted another concern about higher-than-normal horse fly numbers – anthrax. The species are known vectors of the disease, but the extent of their role in spreading the disease is unknown. https://tinyurl.com/yxwbugn9

Horseflies have a maximum range similar to most flies – five to 10 miles – though most fly populations remain relatively close to the breeding ground where they emerged, she said.

“We don’t expect horse flies to spread the disease outside the affected area. It’s just something worth noting because there have been so many cases of anthrax this year,” she said. “We can’t confirm that it’s related to the above-average horse fly populations, but it’s certainly possible and something we want to learn more about.”