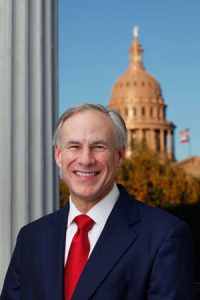 Governor Greg Abbott today, under Article 4, Sections 1, 7, and 10 of the Texas Constitution, formed a Domestic Terrorism Task Force in the wake of the El Paso shooting to combat these hateful acts and extremism in Texas. The group of experts will analyze and provide advice on strategies to maximize law enforcement’s ability to protect against acts of domestic terrorism. The task force will hold its first roundtable meeting with Governor Abbott on Friday, August 30th.

Additionally, the Governor today directed the Texas Department of Public Safety (DPS) to take immediate action to combat any form of domestic terrorism in Texas including:

“Our top priority is to keep Texans safe in their communities,” said Governor Abbott. “Part of that mission is to combat domestic terrorism and root out the extremist ideologies that fuel hatred and violence in our state. This task force brings together leaders with the expertise Texas needs to develop effective strategies and combat domestic terrorism. Texas is stronger when we come together in pursuit of a shared goal, and today’s actions are vital steps in our ongoing fight against extremism and violence. We stand united against those who wish to bring harm to our state, and together we will build a safer future for every Texan.”

The task force will meet quarterly, or at the call of the Governor, and will consist of the following members:

Specific objectives of the task force will include: