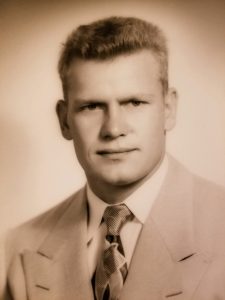 Memorial services for Charles Edward Stearns, age 89, of Dike will be conducted at 3:00 p.m., on Wednesday, August 14, 2019 at the Community Bible Fellowship Church of Dike with Rev. Ron Smedley and Robert Newsom officiating.  There will be no formal visitation.  There will be Military Honors by the Hopkins County Military Coalition to follow.  Charles passed away on Sunday, August 11, 2019 at his residence.  Charles was born on October 19, 1929 in Irving, TX, the son of Charles M. Stearns and Effie Richardson Stearns.  He married Jeannie McClendon Stearns on June 17, 1951 in Irving, TX and she preceded him in death.  Charles served in the United States Air Force and worked as a supervisor for General Motors where he retired.  Charles was the captain of his football team at IrvingHigh School. He also played football for Rice University and later in the Air Force.  He served as vice president of the Irving ISD School Board for many years.  He is survived by his daughters, Pamela Sue Elliott and husband Mike, Patty Jones, and Paula Kay Matthews and husband Pat, all of Dike, one brother, Richard Stearns, grandchildren, Billy Liggett, Jeannie Morris, Kevin Liggett, Kris Coppedge, Mark Coppedge and Cody Elliott, along with many great-grandchildren.  In addition to his wife he was preceded in death by his parents, and sister, Lola Daily. Memorials may be made to the Hopkins County Veterans Memorial, P.O. Box 533, Sulphur Springs, TX 75482. Cremation arrangements are under the direction of West Oaks Funeral Home. www.westoaksfuneralhome.com

Daily Devotional from The Way Bible Church for August 14th, 2019