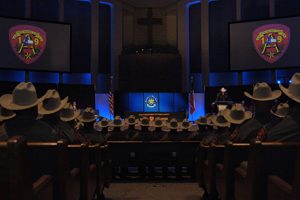 The Texas Department of Public Safety (DPS) commissioned 87 new Texas Highway Patrol Troopers at a graduation ceremony in Austin last week. These new Troopers will join the ranks of thousands of commissioned DPS officers across the state.

“These 87 new Troopers are now part of a legion of men and women who have been set on a path to be the guardians of the public they serve,” said Texas Public Safety Commission Chairman Steven P. Mach. “We are grateful for their willingness to dedicate their lives to protecting and serving Texans.”

Class A-2019 was the department’s 165th recruit school. The recruits ranged in age from 21 to 52, with nine females, 33 military veterans, 10 individuals with prior law enforcement experience and 39 recruits with degrees in higher education. As part of their training, the recruits spent 28 weeks at the DPS Academy. This class was one of the first to be trained as instructors to teach courses to citizens on how to survive an active shooter event.

“With today’s threat environment, protecting the people of Texas is the department’s top priority,” said DPS Director Steven McCraw. “The training our recruits have completed will help them do just that as they embark on their new careers as Highway Patrol Troopers. We congratulate and welcome each of them and their loved ones to the DPS family.”

As with each graduating class, the department presented the following awards:

The new Troopers will report to their duty stations on Sept. 1.