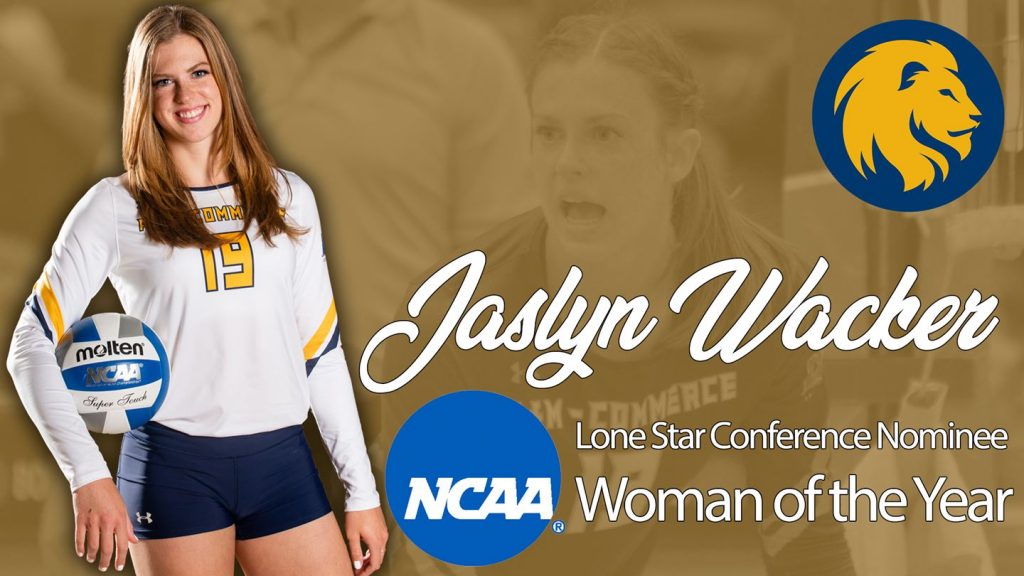 Texas A&M University-Commerce volleyball student-athlete Jaslyn Wacker has been selected as the Lone Star Conference’s nominee for the National Collegiate Athletic Association Woman of the Year award. The NCAA announced the Woman of the Year conference nominees on Tuesday.

“To be the Lone Star Conference representative for excellence in the classroom, in sport, and for community service represents a Best in Class student-athlete,” said A&M-Commerce Deputy Athletics Director for Student-Athlete Success and Senior Woman Administrator Judy Sackfield.  “Jaslyn Wacker exemplifies what it means to focus on more than just self. I am so proud of the woman she is and excited to watch as she continues her journey.”

Established in 1991, the NCAA Woman of the Year award recognizes graduating female college athletes who have exhausted their eligibility and distinguished themselves in academics, athletics, service, and leadership throughout their collegiate careers.

“Jaslyn Wacker epitomizes our mission-driven objective of producing Best in Class student-athletes,” noted A&M-Commerce Director of Athletics Tim McMurray. “Her scholarly achievements in the classroom, highly successful team and individual athletic accolades, and her energetic and engaging spirit blazed a trail for current and future Lion student-athletes. Texas A&M University-Commerce is a better institution because we proudly call Jaslyn an alumnus. We congratulate her and her wonderful family on this well-deserved honor.”

Wacker – from Austin (Vista Ridge) – finished her Lion career as a record holder both on and off the court. After becoming the program’s first Academic All-American during the 2017 season, she repeated that feat in the 2018 season, becoming the first female athlete in A&M-Commerce history to earn multiple Academic All-America awards. On the court, Wacker helped lead the Lion volleyball team to its first conference tournament championship in 31 years. The team would go on to qualify for the NCAA Tournament for the second consecutive year and advance to the Regional Championship match. Wacker ranks first all-time in sets played and second in matches played and was a four-time All-Conference honoree. She graduated in May from the Honors College with her Bachelor of Business Administration degree in Accounting.

“We couldn’t be more proud of Jaslyn,” said A&M-Commerce head volleyball coach Craig Case. “She had an amazing career with Lion Volleyball and now to be in consideration for the NCAA Woman of the Year is such an amazing exclamation point for her career. Her Best in Class performance on the court, in the locker room, in the classroom, on campus, and in the community is on full display for this award. We are very excited for her!”

The nominees for NCAA Woman of the Year competed in 23 different sports across all three NCAA divisions, with 585 nominees across the three NCAA divisions. Wacker is one of 33 Division II honorees after the various conference offices submitted their nominees for Woman of the Year. After gathering the conference nominees, the NCAA selection committee will narrow the field to 10 finalists from each division. The Top 30 finalists will be announced in September.

The selection committee will then determine the top three honorees from each division from the Top 30 and announce the nine finalists in early October. From those nine finalists, the NCAA Committee on Women’s Athletics then will choose the 2019 NCAA Woman of the Year.

The Top 30 honorees will be celebrated and the 2019 NCAA Woman of the Year will be named at the annual award ceremony Oct. 20 in Indianapolis.