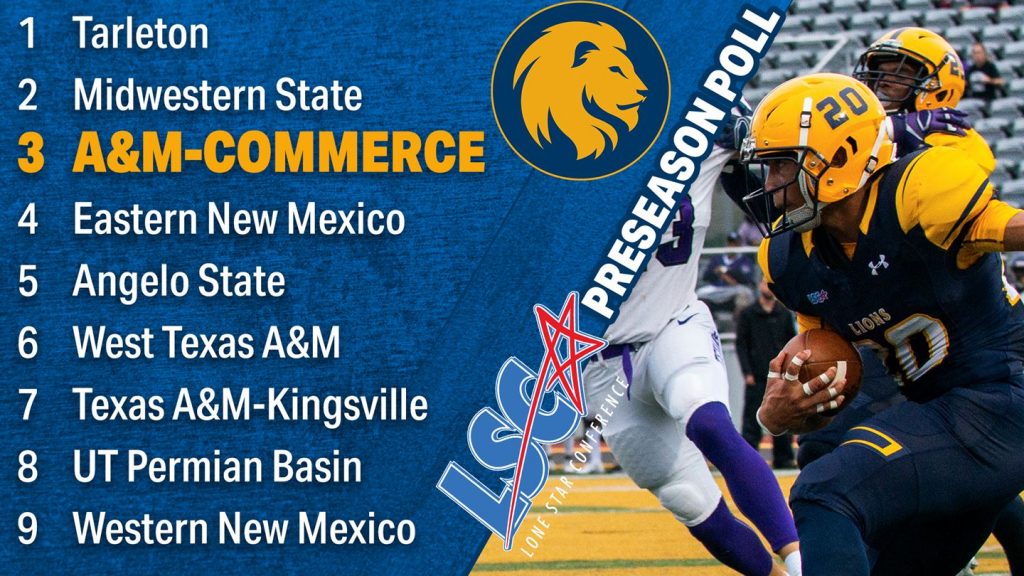 The Texas A&M University-Commerce football team is predicted to finished third in the Lone Star Conference in 2019, as announced at the LSC’s Annual Football Media Day on Monday.

The Lions went 10-3 and were regional semifinalists in 2018, marking their fourth straight NCAA playoff run and sixth consecutive postseason appearance.

The 2019 A&M-Commerce squad will be in its first season under head coach David Bailiff, who is entering his 15th season as a collegiate head coach. Bailiff along with all-star candidates Amon Simon (Humble – Atascocita) and Dominique Ramsey (Converse – Judson) represented the Lions at Media Day festivities at McKinney ISD’s Stadium and Community Center.

Season tickets are available for the Lions’ five-game home schedule, which kicks off Saturday, September 7, when the Lions host Selección Nuevo León for a 6 p.m. kickoff on Ernest Hawkins Field at Memorial Stadium. Tickets are available online at WeAreLionsTix.com or by calling Lion Sales and Service at (903) 468-8756.

All chairback season ticket holders are encouraged to consider philanthropic support of our 424 talented student-athletes with a gift to the Lion Champions Fund. For information on the LCF, please contact Taylor Phelps at (903) 886-5554.

When Should I Water My Yard? WaterMyYard Has An App For That