Rep. John Ratcliffe Expected to Be Nominated by President Trump to Serve as Director of National Intelligence 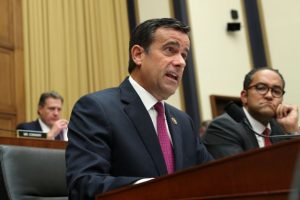 Rep. John Ratcliffe (R-Texas) who has served as the congressman for Texas’s 4th district since 2015 is the expected nominee to become Director of National Intelligence. The 4th District represents Hopkins County.

Ratcliffe released the following statement on President Trump’s nomination for him to serve as the director of national intelligence (DNI):

“I am deeply grateful to President Trump for the opportunity to lead our Nation’s intelligence community and work on behalf of all the public servants who are tirelessly devoted to defending the security and safety of the United States. President Trump’s call to serve in this role was not one I could ignore, and I am incredibly thankful to him for this great honor. I look forward to my new role with energy and focus.

It has been the privilege of my lifetime to be the voice for the people of the Fourth District of Texas over the past five years. I will take their wisdom and common sense with me in my new role, and I will always remember with pride my service to them, and all that we have accomplished together.”