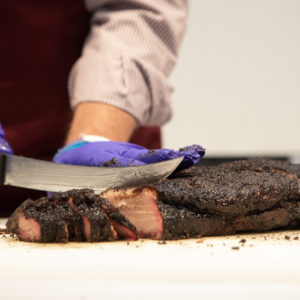 Barbecue Summer Camp spent time discussing many cuts of beef along with the brisket. (Photo courtesy of Kelly Yandell of Foodways Texas.)

Barbecue season is upon us, and as the demand for brisket soars, so does the price.

“What used to be a very inexpensive cut, the primal brisket is now only behind the primal rib and loin in value,” Anderson said. “In the last week of May, the comprehensive cutout brisket value was $213.47 per hundredweight, up 19.4% from the same week the year before. Just during May, brisket prices jumped from $194.39 to $213.47 per hundredweight by the end of the month.”

Barbecue has become a hit nationwide, and when doing a Texas-style barbecue, brisket is a must. Alongside restaurants and craft barbecue joints, people are barbecuing more at home, leading to an increase in the supply of brisket and other meats at grocery stores.

Since prime and branded products are available in-store, backyard enthusiasts and home cooks are using those higher-end meats, making the price shoot up even higher, Anderson said. Big chains like Arby’s have started to put brisket on the menu as well, and for that to happen, a large amount of product must be sourced.

According to Dr. Jeff Savell, distinguished professor and E.M. “Manny” Rosenthal Chair at Texas A&M, College Station, the “Texas Trinity” is brisket, pork spare ribs and sausage, with the driver of Texas barbecue being brisket.

“If you can’t do brisket, then nobody is going to come see you,” Savell said. “If you think about all the top-ranked barbecue restaurants in the state, they all do brisket wonderfully. It is just part of the game.”

While barbecuing has been around for some time, part of the mystique is how to do it and do it well. Infinite resources are making that venture more and more accessible to the home cooks and backyard enthusiasts.

“Some of these new technologies, like wood pellet smokers, have made it where you can nearly set it and forget it instead of feeding a fire all night,” said Dr. Davey Griffin, AgriLife Extension meat specialist, College Station. “You can do those a little easier, they are a little more forgiving, and you can put out a pretty decent product.”

Savell, Griffin and the Texas A&M meat science program partner with Foodways Texas to host two barbecue camps each year: Barbecue Summer Camp and Camp Brisket. At these camps, participants from all over the world come to learn about the craft of barbecuing from product to the pit.

and whole-hog cookery. There was also a beef and pork anatomy overview and a poultry session.

“It’s the perfect storm with these restaurants doing cool stuff, then everyone wanting to duplicate it,” Savell said.

This article by Laura Muntean originally appeared in AgriLife Today.