The Lick Heard Around the South by John Litzler 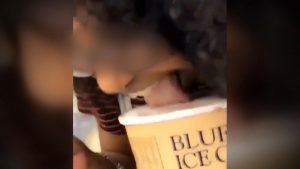 The video is only 9 seconds long. It begins with a young woman running her tongue across an open carton of ice cream. The labels on the ice cream are clear and facing the camera. It’s the iconic Blue Bell brand and the container indicates the ice cream being licked is the company’s tin roof flavor. The male filming the young woman appears to be encouraging her. “Lick it. Lick it,” he says after she’s already scraped her tongue across the top of the ice cream. “You foul,” he kids as she places the lid back on the container. As the young woman moves toward a freezer in the background the setting becomes clearer. The video is being filmed inside a grocery store. “Put it back. Put it back,” the man is heard saying as the young woman opens the freezer and places the closed, contaminated container of ice cream back in the stack of half-gallon cartons already in the freezer. She laughs, presumably as she thinks about the prospect of an unsuspecting stranger purchasing the ice cream. He calls woman some inappropriate names in jest as he ends the video. The final sound comes from the woman, who is still laughing.

I first saw the video on twitter I was left feeling only one emotion: rage. “This person should be prosecuted to the fullest extent allowed by law,” I popped off before I did any research into what that penalty would be. As it turns out, the maximum penalty is significant. The crime is a felony, punishable by a fine and up to 20 years in prison. But I wasn’t the only one. The video went viral and social media was filled with reaction of people who were equally disturbed by the young woman’s actions. The outrage was so great that within a day Blue Bell had identified which Lufkin grocery store was depicted in the video and pulled all the Tin Roof flavored ice cream from the location. By the next day, police had caught the woman, a juvenile from San Antonio who was connected to the Lufkin area by her boyfriend’s family. Because she is a minor, her name has been released and her case will go through the juvenile justice system instead of facing the felony charge. Even Texas Governor Greg Abbott weighed in on the incident on twitter saying he was, “Glad they caught this despicable criminal.”

It’s difficult to pinpoint what caused such an instinctive and unified response. Social media is a natural conduit for directing outrage, but that doesn’t explain why this video, in particular, drew so much criticism and interaction. To be frank, there are many more egregious things happening in our communities and in our world on an hourly basis. Without getting into the science of what makes a video go viral, I’d like to offer a few suggestions as to why this video struck a chord with so many people.

The motive of the woman in the video isn’t entirely clear. Many people have suggested she was “clout chasing”. Clout chasing is a form of attention seeking in order to gain popularity. Clout chasing adherents subscribe to the old adage, “There’s no such thing as bad publicity.” Originally a term used within the music industry, clout chasing has involved into a term that can mean any outrageous action that’s designed to raise one’s public profile and influence. Regardless of the motive, one aspect of the video is undisputable: it was intentional.

In 2015, Blue Bell caused a listeria outbreak causing 10 people to fall ill to the foodborne bacterial infection. The listeria outbreak caused Blue Bell to completely shut down production after three people died. Later findings from the FDA revealed that Blue Bell had previously discovered listeria in one of its plants and that the outbreak may have been avoided if Blue Bell had followed properly cleaned areas where food products were prepared, prevented condensation drips, and taken other simple sanitization steps. Instead of being outraged at Blue Bell for the listeria outbreak, customers responded with lament that they could no longer purchase their favorite ice cream. There was no public outcry for criminal charges against any Blue Bell employees. When Blue Bell returned to shelves for purchase, it was widely seen as a cause for celebration.

So why the double standard? Most people view the 2015 listeria outbreak as unintentional. While it may have been avoidable, hardly anyone believes that Blue Bell wanted its product to be contaminated. At worst, it was a case of negligence. A mistake that resulted from improper care. But the case of The Blue Bell Licker seems different. It’s not just intentional, but borderline malicious. Potentially making someone sick is one thing but doing it on purpose and callously laughing about it is another thing entirely.

Another powerful reason people want to see The Blue Bell Licker punished is to serve as a deterrent to any other would be ice cream contaminators. Perhaps if people know that a viral video could come with a life-altering 20-year prison sentence, they will think twice before pulling a similar stunt. Ironically, however, the swift reaction on the internet has seemed to have the opposite effect. If the goal is to gain popularity, it shouldn’t be surprising that a video with over 12 million views now has some copycats.

The same week of the original Blue Bell licking incident, a 36-year-old man named Lenise Martin III was charged for licking a half-gallon of Blue Bell at a store in Louisiana. Martin actually purchased the ice cream and was even able to show the receipt to authorities when they arrived at the scene. Law enforcement was able to confirm that the ice cream Martin purchased as the same as the carton he licked and placed back into the store freezer. Despite the purchase, authorities charged Martin and he remained in jail over the weekend until his bail was set by a judge last Monday. The reason Martin is still facing charges is because he posted the video on social media. It’s a crime to post depictions of unlawful activity for notoriety or publicity. The public policy purpose behind the law is to prevent these types of copycat scenarios. In this instance, Martin didn’t even make it out of the store before law enforcement was alerted. The unified message from Blue Bell, retailers, customers, and law enforcement is clear: Food tampering is not a joke. It’s illegal, it’s a health risk, and it won’t be tolerated.

Articulating the feeling of vulnerability to someone who hasn’t experienced it can be a difficult task. Ask someone to imagine what it would feel like to arrive home to find that the house had been broken into and all of their personal belongings had been rummaged through. There certainly is a sense of loss from of the items, sometimes invaluable items, that were stolen. The stronger feelings, however, are the feelings of defenselessness. Those who have experienced these feelings of a space that was once considered safe now seeming violated will immediately understand. Those who haven’t experienced it may understand on an intellectual level, but they won’t be filled with the same strong emotions. That feeling, the feeling that something sacred has been violated, is part of what led to such a strong reaction from people who watched the video.

Some people on social media requested and even demanded Blue Bell immediately redesign their packaging to include a seal that would indicate to potential consumers whether the product had been subject to tampering. Others opined that the U.S. Food and Drug Administration (FDA) would require a similar packaging redesign that would include a seal. Several other ice cream brands already have packaging that provides some type of tamperproof seal.

Blue Bell is a Texas institution. It’s unclear what affect these ice cream tampering incidents will have on future packaging. What is clear, however, is that the South takes their summertime Blue Bell very seriously and malfeasance will not be tolerated.