YOUR TEXAS AGRICULTURE MINUTE: Howdy! What are you thinking? Presented by Texas Farm Bureau’s Mike Miesse 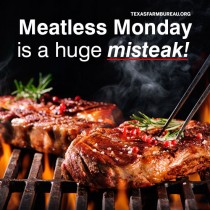 On the Texas A&M campus, or anywhere Aggies gather, you’ll hear a traditional “Howdy!” from almost everyone you meet. There is a Howdy Farm, a sustainable operation, run by students. As an Aggie, I have no issues with that. Sustainability can be a political word. It’s as simple as farming without using up resources or as complicated as making a living from it.

I do have a problem with a presentation made at an orientation of new Aggie students. People who were there have reported to me that representatives of the Howdy Farm encouraged Meatless Mondays. I can’t get into everything wrong with that observance in only a minute. It’s a political issue that is not the slam dunk the presenters believed.

Texas A&M is one of the leading animal science institutions in the world, serving Texas’ status as a top-meat producing state. To suggest that meat is not a desirable product seems disrespectful of both Texas A&M and animal agriculture.

I have asked for an explanation that I’ve not yet received.

Below is a response on behalf of Dr. Patrick J. Stover, vice chancellor and dean of Agriculture and Life Sciences at Texas A&M AgriLife:

Over the last few days, an outdated slide from an undergraduate interest group, Howdy Farms, surfaced endorsing the concept of “Meatless Mondays.” This information is not, and has never been, an official stance of the College of Agriculture and Life Sciences or Texas A&M AgriLife. While we encourage an increased consumption of fruits and vegetables, we do not advocate for the elimination of meat based protein in the diet. Protein is an essential part of the American diet and incorporating beef is one way to ensure we receive the nutrients our bodies need throughout the day.

Through our three-part teaching, research and extension missions, our college departments and programs deliver evidence-based information to help farmers and ranchers produce food in the most sustainable ways possible, enable decision makers to create policies that improve health outcomes, and allow consumers to make better informed decisions about the food they eat.

College campuses serve as a marketplace of ideas and this free exchange of ideas is a cornerstone of our democracy. While we respect and encourage differing viewpoints, official positions on behalf of Texas A&M AgriLife reflect a rigorous analysis of the totality of the scientific literature.