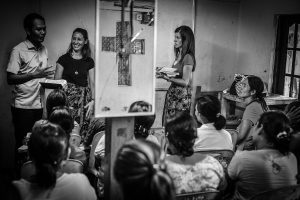 “You’re telling me we can’t do bible school,” a pastor said to me. The emotion I saw in his face was one that I don’t have a word for. It was an odd mix of sorrow and indignation. Of course, I hadn’t told this pastor directly that his border town church couldn’t do a backyard bible club, but for this church, that would be the anticipated result of following my advice.

I had just finished telling the pastor about the importance of conducting background checks as a safety measure to protect the children involved in the bible clubs. Even though the bible clubs took place at church members’ private residences, as opposed to traditional Vacation Bible Schools held at a church owned building, the bible clubs were still a church sanctioned and operated event. The pastor told me that many of the church’s volunteers were living in the country illegally and would not consent to a background check because there was a real fear of deportation. I emphasized to the pastor the church couldn’t know which volunteer workers were refusing background checks because of their immigration status and which were trying to hide something more dangerous, e.g. a history of sexual misconduct. As a result, the church needed every person working with kids on behalf of the church to pass a background check. No exceptions.

Also troublesome was the church’s pick-up system in which the kids of the neighborhood would climb into the church van to be driven to their bible club sites. The pick-up system was not unlike riding the bus to school, but, again, many of the bible club participants were living in the country illegally. Federal law makes it an offense for any person who transports or moves or attempts to transport or move an immigrant (the law uses the term “alien”) who, “has come to, entered, or remains in the United States in violation of law…” In other words, simply driving children around might be considered a domestic transporting violation.

And it’s these types of laws and safety precautions that create a tension for the modern-day Christian and church in America. The command for Christians to show those around them the love of Christ by serving them is unassailable. But the ramifications of laws that prevent domestic transporting, harboring, and encouraging/inducing of illegal immigrants is a suppression of the church’s response.

Adding to the murkiness of the matter, is this simple truth: the government needs people of faith to offer aid and support. The magnitude of the needs is so great that the government simply can’t handle the burden with tax dollars alone.It’s why so many churches are polling places in elections. It’s why, in the aftermath of natural disasters, the government sent people in need to churches to be housed, clothed, and fed. I’ve witnessed this firsthand, because the federal government has asked our church to be available for these exact purposes. In the aftermath of Hurricane Harvey, refugees from the storm were transported all the way to our church in San Antonio. In many instances, people of faith give more money to support those affected by a natural disaster than the Federal Emergency Management Agency (FEMA).

The crisis at the border is similar in this regard. Border Patrol stations can only hold 4,000 people. A count this week revealed over 20,000 people detained in these facilities. One station in Clint, Texas frequently made headlines in particular, because the overcrowded an unsanitary conditionof the station was witnessed by attorneys and reporters who visited the station. The station in Clint is almost certainly not the only facility in such a deplorable state. It shocks our consciousnesses to read about these situations, and rightly so. But our system is overloaded in every way, from housing to the courts and judges tasked with processing immigrants’ requests for asylum. There are some steps the government can take to rectify the lack of resources. Even still, the government needs the help of people of faith. There are many ways Christians and people of other religions are already helping, but they are functioning with one hand tied behind their backs. This is the consequence of statutes, such as prohibitions on harboring and domestic transportation, that outlaw help.

In an age of extremes, I want to emphasize the complexity of this issue. I am an attorney, and I have never encouraged a client to knowingly violate the law. Most Americans, like me, have a tremendous love for our system of government and deeply value the rule of law. That said, love and compassion are virtues of the highest order and the laws of our country should reflect those values. In his Letter from a Birmingham Jail, Dr. Martin Luther King wrote, “I submit that an individual who breaks a law that conscience tells him is unjust, and who willingly accepts the penalty of imprisonment in order to arouse the conscience of the community over its injustice, is in reality expressing the highest respect for law.” Bu what about circumstances where the conscience is unsure whether the law is just or when the law seems just at some timesand unjust other times others based upon the law’s application? I’m not an immigration attorney, but I know that many of our immigration laws have good intent. Many of these laws exist not only to protect residents of the United States, but, in part, to prevent the exploitation and trafficking of the illegal immigrants themselves. Our immigration laws aren’t working. How do we parse through unjust laws and unjust results? I can’t possibly do this topic justice in a single paragraph, but the myriad of unresolved questions about our broken immigration system place Christians in difficult situations in which serving the surrounding community often results in running afoul of the law.

Perhaps no case exemplifies this controversy more than that of Scott Daniel Warren, an Arizona man,who was recently charged with conspiracy to transport and harbor illegal immigrants. This are felony charges. This means Warren faces up to 20 years in prison, if convicted. The jury in his case was unable to reach a verdict and a July 2nd status hearing in the case will provide clarity as to whether Warren will face another trial. I’m not familiar with the details of the case. Still, I was shocked by some of the statements made by counsel for the prosecution during closing argument. The US Attorney’s Office argued driving someone to a hospital or providing food, water, and shelter to illegal immigrants constituted transporting and harboring. These are acts that many would consider basic humanitarian aid.Perhaps I’d view the case differently if the government argued that after rendering aid, citizens, including Warren, had a duty to report an illegal immigrant to law enforcement. Maybe I could better understand the government’s position if it claimed continued housing of illegal immigrants without reporting to authorities constituted harboring. But that doesn’t appear to be the government’s argument in the Warren case.

In a similar case in Arizona a group of four women were convicted for entering a wildlife refuge without a permit, driving a vehicle on the refuge without a permit and abandoning property. The women had left water at the boarder for immigrants who suffered from dehydration after the lengthy journey to the United States. The women were each sentenced to 15 months’ probation and a $250 fine. Again, I’m not familiar with the details of the case, but the charges reveal that this case was different. The women were not charged with the felony conduct of harboring illegal immigrants by providing water. (Though this may have only been because the government couldn’t prove the women’s intent or that any illegal immigrant drank the water). Still, there is a significant difference between the government prosecuting someone because location where the individual provided food and water constituted a form of trespassing and the government prosecuting an individual because merely providing food and water to an illegal immigrant is, in and of itself, a criminal action.

In his gospel account, Luke records an interaction between Jesus and a religious leader. Jesus asks the leader how he read the law and the leader replies with commands from Deuteronomy and Leviticus: “Love the Lord your God with all your heart and with all your soul and with all your strength and with all your mind and, love your neighbor as yourself.” When asked who constituted a “neighbor” Jesus answers with a story that illustrates that everyone is our neighbor. In the story, three men find an injured man on the side of a road. Only one man, a foreigner, takes the time to bandage the injured man’s wounds and take him to an inn where he will be cared for. (You can read the story in Luke 10:25-37). In the story, it’s clear that “neighbor” is not defined by one’s national origin or religion. Christians are to care for those in need of our help. “Go and do likewise,” Jesus says to the religious leader. There’s an entire concept in our American legal system based on this biblical account. In Texas, it’s called the Good Samaritan Act and it’s intended to protect from civil liability those who, in good faith, offer emergency care to people who need it. Love your neighbor as yourself.It’s the foundation of our “golden rule” – to treat other people the way you would like to be treated.

As a young Christian growing up in the bible belt, I was often given a simple but powerful thinking challenge. Many have probably been given a similar challenge. It went like this: If you were arrested for being a Christian, would there be enough evidence to convict you? The challenge was to reflect on what actions or “fruit” in your life showed that you were loving the Lord your God with all your heart, soul, mind, and strength and that you were loving your neighbor as yourself. The question wasn’t whether you claimed to love God and others. The question was, in a court of law, how strong would the evidence be against you? In many places in the world, this was not an intellectual challenge, but a reality. As a teenager in America, though, with our 1st Amendment its guarantee of religious freedom, it always felt like a mental exercise. These days, however, the question seems increasingly less hypothetical.

In her closing argument during the Warren trial, US Attorney Anna Wright sought Warren’s conviction for conspiracy to transport and harbor illegal aliens. “He gave them food, he gave them water, he gave them a place to stay… He did a bad thing,” she argued. But Jesus said that when he comes he will sit on his throne as King and say, “For I was hungry and you gave me something to eat, I was thirsty and you gave me something to drink, I was a stranger and you invited me in…” (Matthew 25:35), and it doesn’t sound like a bad thing.