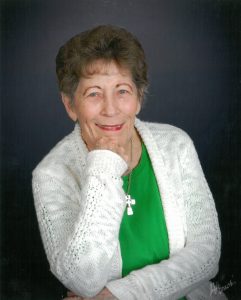 Funeral Service for Eddie Jo Edge will be held at 2:00 P.M. on Tuesday, June 11, 2019 at First United Methodist Church.  Interment will follow at City Cemetery.  Visitation will be held one hour prior to the service.  Mrs. Edge passed away on Saturday, June 8, 2019 at Sunny Springs Health and Rehab.

Eddie Jo was born on December 23, 1929 in Breckenridge, Texas to Edith and Irwin Dindinger.  She graduated from Pine Tree High School and Kilgore Jr. College as a X-Ray Technician.  She married Daniel Edge on September 5, 1951 and to this union was born her son, Samuel Rey Edge.  Eddie Jo was founding Director and Director of the Lake Country CASA for 10 years.  She was awarded Woman of the Year in 1978 for her community contributions.   She was member of Beta Sigma Phi, Young at Heart, FUMC, Sunday School Teacher for children and adults.  A member of Good News Sunday School Class and was in a casserole business with Janie Crump.

Daily Devotional from The Way Bible Church for June 10th, 2019