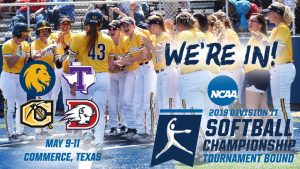 The No. 7 Texas A&M University-Commerce softball team is the second seed in the South Central Region in the final edition of the NCAA regional rankings, as released Monday. As the second seed, the Lions will host half of the regional field in a double-elimination tournament, the first time in program history the Lions have hosted an NCAA regional.

The Lions will host third-seed Tarleton, sixth-seed Cameron, and seventh-seed Dixie State. Texas A&M-Kingsville earned the first seed in the region and will host the other half of the South Central Region bracket, with games played May 9-11. The winners of both the Commerce and Kingsville brackets will advance to the South Central Super Regional Tournament, held May 16-17, hosted by the highest remaining seed.

The Lions earn their third berth into the NCAA regional tournament, and their second in a row and achieved their highest ranking in program history. Lion Softball becomes the fourth team sport in school history to host an NCAA playoff series, after football (1991, 2016, 2017), men’s basketball (2005), and soccer (2014, 2016).

The Lions will begin the tournament facing Dixie State, the seventh-seed in the region. It is the first time in history the two teams will meet. A&M-Commerce will host a minimum of six games, until all but one team has been defeated twice.

The No. 7 Lions are 38-12 on the season and finished the regular season in second place in the Lone Star Conference standings, their highest finish ever. They advanced to the LSC Tournament Championship game for the first time in program history.

Tickets to the NCAA South Central Regional Tournament will go on sale at 8 a.m. on Tuesday. They can be purchased at WeAreLionsTix.com, by calling (903) 468-8756, by visiting the Lion Sales & Service Box Office in the Field House or by purchase at the gates of the field.