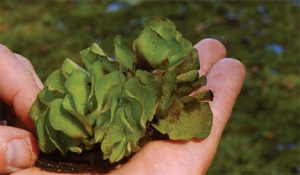 Recent vegetation surveys conducted by the Texas Parks and Wildlife Department’s Aquatic Habitat Enhancement (AHE) Team have revealed that giant salvinia – an invasive, free-floating fern that has been wreaking havoc on East Texas lakes for more than 20 years – is believed to have been eradicated from Lake Fork and Lake Athens.

“We have not found giant salvinia in either lake since early last winter,” said John Findeisen, AHE Team Lead. “This is very exciting news, because when we first discovered the 12 to 15-acre infestation at Lake Fork back in 2017 we weren’t sure if eradication was even possible. This success goes to show you that with early detection and a coordinated, rapid response between TPWD, local organizations, anglers and boaters, we can effectively fight back against this invasive plant.”

Giant salvinia was first discovered in Texas on Toledo Bend in 1998 and has since spread throughout East Texas. The most recent infestation at Lake Fork was discovered in November 2017, and Lake Athens was first found infested with the invasive plant in February 2018. As part of rapid response efforts following these discoveries, the AHE team deployed floating booms to contain giant salvinia in affected areas and to increase the efficiency and effectiveness of herbicide treatments.

“Floating containment booms, strategic herbicide treatments and frequent below freezing temperatures all contributed to the elimination of the remaining salvinia,” Findeisen said. “We are happy to report to anglers and boaters that the containment boom placed in Lake Athens to control the infestation has been moved, and the boom currently in place at Lake Fork will soon have an overlapping opening to allow access to the back of White Oak Creek without having to cross the boom.”

Findeisen said that while giant salvinia has been eradicated from these lakes, TPWD will continue monitoring them closely as they are still at high-risk of reintroduction due to their popularity as angling and boating destinations and their proximity to other infested lakes.

“As the weather warms and people start visiting these lakes more often they need to remember to properly clean, drain and dry boats and equipment to prevent reintroductions of giant salvinia,” Findeisen said. “These procedures don’t just apply to lakes where there are known infestations of giant salvinia, because every lake in Texas is capable of harboring a variety of aquatic invasive species, including water hyacinth and zebra mussels.  Nobody wants to be known as the person that brought salvinia to a lake.”

All boaters, anglers and lake-front property owners should learn to identify giant salvinia as well as other invasive species that occur in Texas waters. Most importantly, boaters should remember to clean their boats and trailers before leaving the boat ramp. Transporting giant salvinia, along with other invasive species, is prohibited by law and punishable by a fine of up to $500 per violation.

Anyone who spots this invasive plant outside of affected areas should report additional infestations by calling (409) 698-9121 or emailing aquaticinvasives@tpwd.texas.gov.

For more information on proper cleaning protocols for boats and equipment, and to learn more about giant salvinia and other invasive species, visit tpwd.texas.gov/giantsalvinia.