Those Yellow Flowers in the Pasture by Mario Villarino 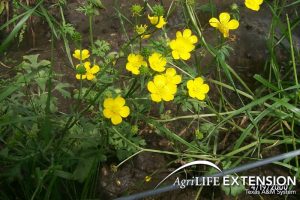 As I was visiting ranches and answering calls at the Hopkins County Extension Office I got several phone calls related to “those yellow flowers” in the pasture everywhere. There are several yellow flowers covering pastures in NE Texas this time of the year but two of them are the most common: Buttercups and Groundsel. There are 18 species of Ranunculus (also known as buttercup) in Texas. These are perennial or annual herbs with a sharp, bitter taste. The stem leaves are alternate, with palm like veins, and are deeply lobed or dissected. The basal leaves usually have a distinctly different shape. Flowers are arranged in fan shaped clusters. They usually have five glossy yellow petals and give rise to a small, dry fruit. There are two or more species of buttercup in every vegetational region of Texas. However, significant populations are usually found only in the eastern third of the state. Virtually all of the species require ample water and are found in seeps, mud flats, along ditches or in standing, shallow water. All species are thought to contain a glycoside at various concentrations that is converted to protoanemonin, which acts as a blistering agent. The levels of glycoside increases greatly as the plants mature and reach the flowering stage. Because protoanemonin is not stable, the plant is not a problem in hay. Although the toxin content varies widely within and among species of buttercup, a large amount of plant material is usually required to cause clinical signs with the species growing in Texas.The signs of poisoning are those of severe gastrointestinal irritation and include: Red and/or ulcerated oral tissues; Salivation; Blood-tinged milk; Diarrhea; Abdominal pain; Depression or excitation; Convulsions; Death. Most cases of buttercup poisoning in Texas are not life threatening. Horses consuming buttercup can die from colic. Texas groundsel (Senicio Spp)  is a cool-season annual herb. It grows to 12 to 30 inches tall. The plants are often whitish with hair, but can be nearly hairless. The unlobed, clasping leaves gradually reduce in size toward the top of the plant. Showy yellow flowers are produced in the spring. The seedling, or winter rosette, often has a purplish cast to the underside of the leaves, especially on the midrib .Texas groundsel is found in the eastern half of the state. It is abundant in sandy soils and may be a predominant species in freshly cleared forest.The toxic agent of these plants has not been established, nor have experimental feeding trials proven its toxicity. In field cases, cattle consuming Texas groundsel developed clinical signs and lesions typical of pyrrolizidine alkaloid poisoning, as occurs with other Senecio species. Clinical signs appeared several months after it was ingested; the plants were long dead when the animals became ill. The dead animals had classical liver cirrhosis identical to that produced by pyrrolizidine alkaloids. Tests on many normal-appearing herd mates of the dead animals showed that they also had liver damage. Llamas pastured with the plant for months at a time have also succumbed to terminal liver cirrhosis. The clinical signs of poisoned cattle and llamas may include: Anorexia; Depression; Weight loss; Aggression; Death. These animals die because of liver failure.

What to do: March to early April is the best time to kill buttercup. The goal is to spray buttercup before bloom. Fertilizing and liming to soil test recommendations and efficient utilization of pastures or hay fields are the primary ways to decrease weed pressure.

REMEMBER: THE LABEL IS THE LAW!  Always read the pesticide label before using.

The Northeast Texas Beef Improvement Organization (NETBIO)   will host its 2019 Beef Up Cattlemen’s Conference scheduled for May 10, 2019 starting at 2:00 PM. The session starts at 2:00 pm with Registration and Exhibitors Displays, followed by Animal ID: new perspectives, Hank Hayes- Texas Animal Health Commission, Knowing Your Customer, Chris McClure Private Consultant, Creating native grasslands Christian Ebel- Hopkins County, Fifty shades of cattle health, Kevin Gray- 4G Veterinary Care and The Beef Industry Today, Randy Harp—Texas A&M Commerce followed by a Q&A portion and ends with a Steak Dinner. The program will be held at the Hopkins County Regional Civic Center Arena. The program is free for beef producers but registration is required by calling 903-449-6079 or email belldbarb@aol.com to secure meal before May 1, 2019.