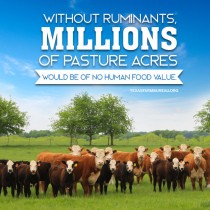 Many people believe cutting back on eating meat will drastically reduce world greenhouse gas emissions. Much of this is based on a 2009 analysis by a Washington-based group.

The United Nation’s Food and Agriculture Organization has rained on that parade, but it’s hard to put toothpaste back in the tube.

The report blamed animal agriculture for 51 percent of greenhouse emissions, but a recent FAO report pegs the number at 14 percent.

If Americans were very diligent about “meatless Mondays,” emissions by could be reduced by .5 percent!

According to the FAO, about 70 percent of agricultural lands around the world are grasslands, not suited for growing anything else. We harvest that grass with animals.

Raising livestock is a reliable income for many farmers around the world. No wonder food-deficient countries want some of that.

Northeast Texas Beef Improvement Organization Preparing for Pre-Conditioned Calf And Yearling Sale to be Held on Wednesday, May 15.

Como-Pickton Eagles looking to have bounce back season

Chamber Connection for 8/18 by Butch Burney