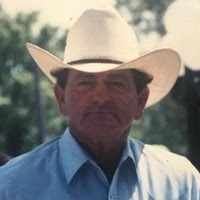 Bob passed away surrounded by his family on Thursday, April 11, 2019, at his home in Cumby, Texas.

Bob was a rancher, dairyman, horseman and owner of two livestock sale barns.  He had a God-given, natural talent for recognizing and raising high quality cattle and horses. Because of his instinctive “good eye,” many other ranchers and horsemen from the surrounding area came to Bob for advice on buying livestock.  He lived in Cumby for more than 60 years.  He was a Master Mason for 50-plus years and belonged to Hopkins Lodge #180.

Bob loved his family, hummingbirds, bluebirds and all animals, especially cows and horses.  He never met a stranger and was a man of faith who would give anything to anyone in need.  He always had a strong work ethic. His philosophy was: “Get up and go to work. You can sleep when you’re done. But most importantly, just get up and work!” He had no tolerance for laziness and did his best to teach his children work was required, not optional. Everything he owned had some shade of blue in or on it because his favorite color was blue. Bob was well-known as a cautious driver. If you have ever been caught in a traffic jam in Cumby, Texas, it was probably due to Bob’s slow driving!

He was preceded in death by his parents; son, Bobby Gene Vinson; grandson, Chance Penland; and granddaughter, Tiffany Ash.

Arrangements are under the direction of Jones-Walker and Son Funeral Home. www.jones-walkerandson.com

Hearts of Life Animal Rescue Dog of the Week-Meet Rufus!