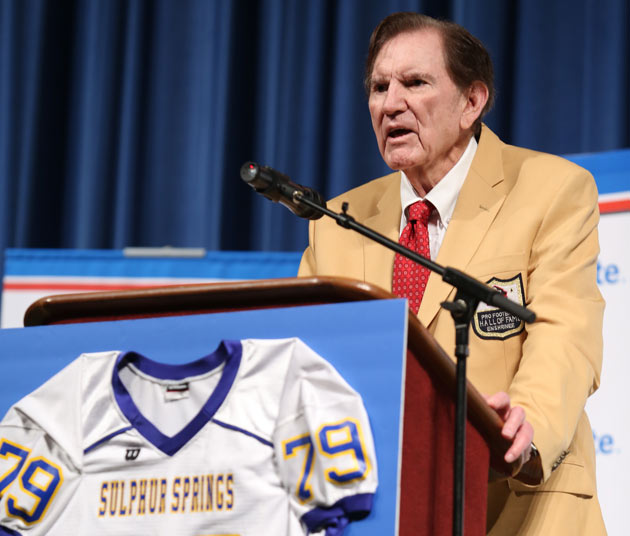 ESPN’s Adam Schefter is reporting that Sulphur Springs native and NFL Hall of Fame member Forrest Gregg has passed away at the age of 85.

Gregg was born on a farm in tiny Birthright, Texas-one of 11 children. At age 15, Gregg moved on his own 10 miles to Sulphur Springs to begin an outstanding career as a football and basketball player. Few stats were kept on linesmen then, but Gregg was so good that enemy game plans always stated in bold letters, “DON’T RUN PLAYS AT THE BIG TACKLE.” The giant-sized Gregg starred in football and basketball in high school, attracting offers from A&M, SMU and others. He chose SMU and earned all-SWC honors as a Mustang two-way tackle in 1954 & 1955.

During his 14 years with the Packers, Gregg epitomized Vince Lombardi’s toughness and integrity. He was chosen all-Pro eight straight times. Green Bay won five straight NFL titles while he played there. Lombardi’s called Gregg “the finest player I have ever coached.” Gregg later coached in the NFL 11 seasons with Green Bay, Cleveland and Cincinnati. After re-establishing SMU’s football program, Gregg became AD at SMU on April 11, 1990. Gregg and his wife Barbara, have two children, both of whom graduated from SMU.

During a “Hometown Hall of Famer” ceremony in 2013 Gregg said, “Whatever I have achieved links back to this town and this high school,” he said. “From the people who befriended me, gave me a place to live and gave me a job and direction…I want to thank each and every one of you.”

Daily Devotional from The Way Bible Church for April 13th, 2019